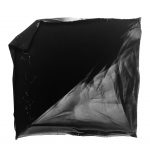 The opening track Sonorous House sets a quite scary mood with its recordings of a Mojave desert wind storm. For the rest of the album the storm settles down a bit:  the atmosphere changes  into a (relatively) calm night mood in Los Angeles Without Palm Trees. Flutter In Place, the album closer, features a recording of the world’s largest colony of Mexican free-tailed bats departing their cave to roam the summer night air of Southeast Texas.

But this album is not built from environmental recordings alone: ‘sounds on this album are both recorded and produced. Interspersed are a variety of electronic instruments and processes, and compositional techniques that are variously clear-cut or intentionally buried by digital processing.” Two of the tracks (the title track and Frain, Refrain) are entirely created using only her voice.

A Parallel Array Of Horses (the title is derived from a geological phenomenon) is Geneva Skeen‘s personal reflection on the current state the world is in:
“As I’ve tried to understand what is happening now without judgement––a collapse of systems, boundaries, and symbols that crumble faster with each forcible attempt to reinstate them––I am finding equal failure in streamlined, singular methodologies for both comprehension and composition.”

A Parallel Array Of Horses is a Room40 download-only release (no physical edition).

KATE CARR – THE THING ITSELF AND NOT THE MYTH

Following her inspiration from the poem from Adrienne Rich “Diving Into The Wreck”, Kate Carr created this album entirely from sounds “gathered underwater an along many shorelines”, recorded in Iceland, Ireland, Scotland and France.
Furthermore, she used “drones played by a synchronised swimming speaker broadcasting into a fjord, many spluttering radios, morse code, and geese.”

So, The Thing Itself And Not The Myth first and foremost is an album built from environmental recordings. But by carefully adding subtle electronics, Kate Carr created a musical compositions which is a perfect aural companion to the poem describing the adventurousness of solitary wreck-diving:

I am having to do this
not like Cousteau with his
assiduous team
aboard the sun-flooded schooner
but here alone.