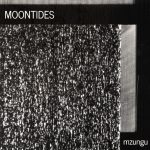 On Moontides, Jonah ‘Mzungu’ Hebron covers the four seasons in four  very long tracks: the total album playing of the album is almost 80 minutes! Each track contains a collection of samples, stretched sounds, that ‘start at the same time, but due to their differing lengths they never ‘complete’ together’. Due to the repeated playing of the samples, a slow and unpredictable rhythm occurs.
It was Mzungu’s intention ‘to do away with scales and notation and see what happened. All of the keys and scales are by ear, elements are pitched according to feeling, not rule. Tones clash, do battle and drift apart falling into harmony then dissaray’.

One might of course argue that all these elements have been used before. The four seasons as inspiration: check Wendy Carlos (not to mention Vivaldi, whose ghost is definitely present here). The generative ever-changing effect of using loops with different lengths: check Brian Eno. The rhythmic effects of out of phase loops: check Steve Reich. Seemingly endless tracks with almost unnoticeably changing orchestral loops? Check William Basinski.
But is it fair to make these comparisons? Personally, I don’t think so – I could argue that 90% of the ‘ambient music’ I currently hear has been ‘done before’ in a way. So if that ‘new’ is a serious criterium I could stop this blog. Fact is that these pieces are an extremely pleasurable listen and take some surprising turns in their very own way – especially in the use of orchestral string samples in Autumn and Winter.
In creating this ‘butchery of beauty’, as he calls it himself, Mzungu delivers an album that sounds surprisingly fresh and original.

I don’t know anything about the background of Jonah Hebron, apart from the fact that he has worked three years on this particular album. (And that his Bandcamp page also contains a 2016 release titled “Songs For My Own Death”).
Ánd that he is a modest and generous man, who offers his music as a free download for everyone to enjoy. 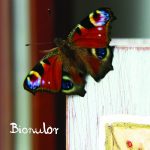 Somewhat related (in using orchestral samples I mean) but also very different is this new album by Bionulor (Sebastian Banaszczyk).
One of his earlier album, Erik (2013), de- (and re-)constructed the music of Erik Satie. This time, the A.S.in the title stands for Alexander Scriabin, who now gets the “100% sound recycling” treatment.

“100% Sound recycling” means that “every track is created solely on the basis of processing only one sample deriving from a specially selected source sound, without any additional sounds or instruments.”
This restrained, minimalist approach is very effective: each track is circling around (and diving deep into) the original fragment, with sparkling result. Bionulor deliberately keeps the tracks relatively short, as a result of his self-imposed limitation to use only one single sound fragment as a basis of the piece.
I would not dare to say if the initiated listener would recognise Scriabin’s work in this music, since it can zoom in into the tiniest of details. But I’m sure these pieces shed a different light on the original sources.

A.S. is Bionulor‘s eighth solo album. Part of his work is also created for theatric plays and for multimedia performances (such as Stary Pisarz, “the old writer”, dedicated to William S. Burroughs)