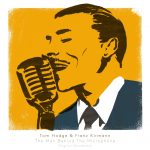 TOM HODGE / FRANZ KIRMANN – THE MAN BEHIND THE MICROPHONE

From the very first track of this album it is clear that this is not the first music created by Tom Hodge and Franz Kirmann. They are experienced artists, having collaborated for more than 10 years and released three albums as Piano Interrupted.
This is the second soundtrack they worked on together, although one may actually called it their first because the recording started long before the soundtrack for McMafia for BBC One.

The Man Behind The Microphone tells the story of Hedi Jouini, known as ‘the godfather of Tunisian music’, the ‘Frank Sinatra of Tunisia’. Director Claire Belassine found out by chance that her grandfather was a legend and made a portrait the reflects ‘on the nature of fame, culture, heritage and homeland.’

Hodge and Kirmann were loosely inspired by Jouini‘s music, using small musical phrases, or using harmonies and chords in a relative key to use as a starting point for their pieces, but  they did not recreate traditional Tunisian music. More so, their music ‘echoes the melancholy and investigative nature of Claire Belhassine’s quest for her grandfather and the mysterious and fragmented aspects of the story.’
Kirmann‘s electronics and Hodge‘s piano and clarinet parts completed by the London Contemporary Orchestra string quartet.

Even if you haven’t seen the documentary, this is a strikingly beautiful score, ‘oscillating between post-classical, minimalist and ambient music.’ 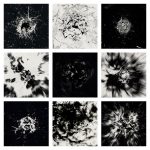 With Black Noise as the album title and an opener called Fucked Up Anthem I expected this to be an album full of loud agressiveness. But to my surprise the nine tracks were nothing like that at all. On the contrary, most of them are gentle, carefully orchestrated compositions that would perfectly fit a movie soundtrack. With ‘carefully orchestrated’, I mean to say that it’s not the average big-budget large-screen Hollywood sound: there are some nice gritty distortions involved (try the slowly deteriorating Drops In An Ocean for an example, or Pressure Principle). But overall, the atmosphere is soft, cinematic, perhaps even ‘romantic’.

Harnes Kretzer is inspired by early synth pioneers like Klaus Schulze and Tangerine Dream as well as composers like Erik Satie, Nils Frahm and Dustin O’Halloran. By consciously ‘downgrading’ the acoustic instruments using old tape recorders and adding various effects, he creates a personal lo-fi sound that immediately stands out from many others.
This is not a soundtrack recording, but it could have very well been one. And a good one, too.