Radboud Mens is a dutch composer and sound designer that seems to be operating somewhat below the radar. ‘Seems to’, because over time he has released an impressive body of work – solo releases as well as collaborations with artists like Stephan Mathieu, Janek Schaefer, voice artist Jaap Blonk, Michel Banabila and more recently with Matthijs Kouw.
His first album was released in 1999 and since then many interesting albums have appeared in a more or less steady flow. 2018 looks like an especially productive year, with the release of two solo albums, a collaboration with 1605Munro (and two successors of his drone work together with Matthijs Kouw). 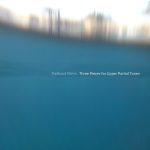 I’m afraid I was not sure what upper partial tones are, and there is no explanation on the release page on this albums background. So, usually that’s where Wikipedia comes to the rescue:
“An overtone is a partial (a “partial wave” or “constituent frequency”) that can be either a harmonic partial (a harmonic) other than the fundamental, or an inharmonic partial. A harmonic frequency is an integer multiple of the fundamental frequency. An inharmonic frequency is a non-integer multiple of a fundamental frequency.”
OK. So I’ll probably have to read that article more closely later.
But for now: better let the music do the talking.

It’s easy to hear that this album is about but I could simply hear that this album was about composing with overtones.  Radboud Mens opens the album with a relatively short – and very relaxed – Polyrhythmic Ambient Drone, which sets the mind for the two longer Pieces for Oboe and Electronics (in C and in G, respectively). In these pieces (23 and 32 minutes respectively), the true magic happens ‘above’ the drone created by the stretched oboe sample.
By carefully manipulating this ‘fundamental’ electronically, Mens creates a melody of floating overtones which become the true centerpiece of this music. When listened on speakers, it is as if these notes float through the listening space looking for their place in the room, its emphasis changing with every move of the listener’s head.
It may need some dedicated listening, but once it grabs you there’s magic in the air. 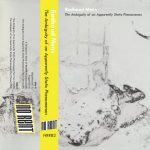 RADBOUD MENS – THE AMBIGUITY OF AN APPARENTLY STATIC PHENOMENON

The Ambiguity Of An Apparently Static Phenomenon was originally released as a limited (100) cassette edition on No Rent Records, but can be downloaded for free from their Bandcamp page now since the cassette has sold out (a few signed copies are still available directly from Radboud Mens himself).
The No Rent Records Bandcamp page lazily mentions Side A and Side B as track names, but from Mens’ page we learn that there are different track titles: Sequence, Tongue, A Temporary State of Relative Positions and the three part title track.

The Ambiguity …investigates how ‘apparently static’ (drone) music can still be an interesting listen. In this case Radboud Mens is not primarily focusing on using overtones, but creates soundscapes using bass guitar, electronics, organ, synthesizer, a Granulator II sampler and electric guitar.
The question is what exactly is ‘ambigue’ about the ‘apparently static phenomenon’, because this is a very pleasant listening experience – at least for anyone who can appreciate ‘apparently static’ drone music. 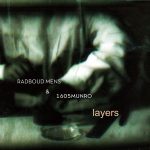 After this healthy dose of drones it can be good to return to somewhat more ‘down-to-earth’ music (with the emphasis on ‘somewhat’ of course).
This collaboration with 1605Munro sheds some light on a different aspect of Radboud Mens‘ music: ‘warm intelligent soundscapes that feel brilliantly open, thoughtful and oh so quiet. A contemplative and entertaining study in the art of skipping unnecessary notes.’ (Roel Kruize in the liner notes).

1605Munro is a somewhat weird-sounding alias of Andrés G. Jankowski – born in Buenos Aires, but ‘radicated’ in Berlin. And there’s a definite Berlin touch in this 10-track collection of electronic paintings, from  frivolous rhythmic tracks to dead-serious soundscapes. Each track treasuring an original Krautrocky touch – a slightly lighter touch perhaps than the drone-recordings, but adventurous in their own personal way!

If you want to dive even deeper into Radboud Mens‘ drone experiments: the collaboration with Matthijs Kouw (1, from 2017) gets no less than two follow-up editions: 2 and 3/4 – the latter being a 2-CD album. Due to production complexities the release order got unintentionally mixed up: 2 is now scheduled to be released early next year, while 3/4 is already available now.
Be prepared for the more extreme minimalist drones, Eliane Radigue style, with Radboud playing long magnetic strings and analog filters and Matthijs playing modulars.