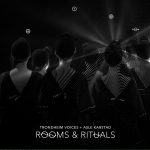 Even though it’s located in the middle of Norway, not even in the upper north, I always associate Trondheim with a faraway distant city, somewhere beyond the end of the earth. A strange, almost imaginary place, one that you’re not very likely to visit soon but for that reason also has a strange attraction. That description somehow also fits the Trondheim Voices choir, a pool of (up to) 10 female singers performing choral works that seem to have originated from previously unknown parts of the world.

‘These voices are like no choir you ever heard. They can form pale clouds of sound, or pools of glowing light, or bright shafts of pure sound. Phrases can soar before suddenly reversing direction and travelling backwards, but along a different tangent.’

(While the ‘no choir you ever heard’ will probably be true for most listeners, it is only partly true: the music on this album somewhat reminded me of the work of Meredith Monk, especially her 1979 album Dolmen Music)

Most of Trondheim Voice‘s music is improvised, but their performances can also include composed or traditional material. Atmosphere can shift from soothing angelic to devilishly scary within a few seconds.
Their performances are often site-specific, with the singers walking around the area carrying Maccatrols: small wireless boxes, designed by sound designers Asle Karstad and Arnvid Lau Karstad, featuring controls that enable each one to modify her voice with various effects.
The voices are the Maccatrols’ only sound source and the manipulations are created in real-time – making the compositions even more otherworldly (or sometimes downright scarier) than they already are on their own.

Experiencing a Trondheim Voices & Asle Karstad performance in the right environment will probably be an unforgettable experience. That may be reason enough to travel to Trondheim somewhere in the future. But until that happens, this album will do fine as a substitute for a live performance: the pieces are taken from several different performances. It should be noted that all these pieces are recorded live without overdubs!
Definitely one of the most exciting and unexpected listening experiences I heard in a long time!

(Warning: some parts of the album, as well as the Live Impro #1 video above, may not be suitable to listen shortly before sleep time.)