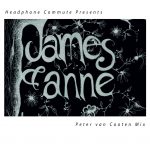 A collaboration of forces between three separate entities, Headphone Commute, Ambientblog, and Slowcraft Records, are proud to present a unique mix by a colleague and partner in crime, Peter van Cooten, of beautiful works from a beautiful couple, James Murray and Anne Garner, culminating a selection of compositions they released individually, as well as together under various project names. Peter then carefully compiled these pieces together into a gorgeous journey of ambiance and voice, and now, along with the appearance on the Podcast, we are honoured to offer this little gem to you as a digital download (lossless, of course) via the new entry of Headphone Commute Presents on our Bandcamp! Whew!
Headphone Commute

This mix is published as  part of the “Headphone Commute Presents…” series.
A High Quality WAV version of this mix can be downloaded from the HeadPhone Commute Bandcamp page

Or:
Stream it from Mixcloud: