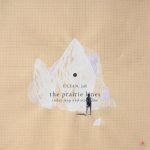 The Eilean Records Label map (‘based on a map with 100 points. Each point is associated to a number. Each number to a release.’) fills up rapidly with a steady stream of new releases. #58 On the map is Today Leap and Stop Time by The Prairie Lines. If you think that is a strange title, wait till you see the track titles: Slow Hand Clap for Working Late, Department of Soft Focus, Transmissions for Street Punks, Stay Elegant Lose You Mind, etc. etc.

The Prairie Lines is Bill Bawden, recording under this alias since 2015 (before that he released his music as Herzog).
It’s not easy to describe the music on this album: there’s a lot of lofi sounding analogue tape loops involved, including the warm distortion and clicks and cuts that comes with those, and the occasional unspecified instrument. The overall sound is carefully constructed and very, very relaxed. The deconstruction of the tracks and their deteriorating elements are reminiscent of the work of William Basinski, but not in length: the (9) tracks are all between three and six minutes. It’s definitely ambient, but not the sleepy-droney kind meant to be ‘ignorable’ – because the sounds definitely deserve your exclusive attention.

The Eilean Records bandcamp site has only left the digital download to offer, but a few remaining CD copies are still available directly from the Prairie Lines page. 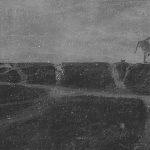 Tonal Glints is the second of three albums James McDermid dedicates to his sister Harriet, who passed away in August 2016 after 2 years of illness. Most of the music was written for her and for himself, to deal with the grief, ‘to articulate what I was feeling’.

‘After she’d passed away, there was the question around what to do with the many tracks I had written; they had, in all honesty, been written for her. For me to perhaps leave them sitting on a hard-drive seemed a disappointing end to what amounted to, in my mind, a tribute to her.’

McDermid decided to publish the tribute when he was offered to release the 25-track(!) Ghost Folk on Polar Seas Recording in April 2017.
And now the follow-up is released by Krysalisound: 40 minutes in twelve personal musical sketches.

Knowing about such a heavy and personal background possibly defines what you hear in the music. And although, on one side, it is important to know about the process that lead to the creation, on the other side it might be better to nót know about that and let the music come to you aligned to your own personal frame of mind. (Alas, if you read until here, I’m afraid that is impossible now).

The inspiration for this music may have come from a very sad personal situation, but the music is not necessarily ‘hard’ or ’emotional’ to listen to. On the contrary perhaps: it offers a lot of consolation. What it is defined by the perception of the listener, it may offer whatever he/she needs at that moment.

By the way: James A. McDermid also recently released Melodies of the Widowbird in the ongoing release series from the 1834 label label series.
All of the releases from this label are free downloads, so it’s a good way to start investigating McDermid‘s work (ánd that of many others in this generous series)!