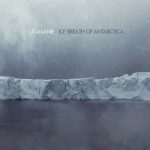 With a title like Ice Breath Of Antarctica and a release on the Cryo Chamber label you know you’re up for some of the darkest, coldest and most immersive sounds imaginable. So you shouldn’t start this journey unprepared. Visiting an environment where man isn’t meant to survive easily can be enjoyable when it’s imaginary – that’s the joy of ‘isolationist’ ‘arctic’ ambient.

Ugasanie (a one man project of Pavel Malyshkin from Belarus; the word translates as ‘extinction’ or ‘fading’) has spent a lot of time in the Arctic Circle, in the coldest areas of the world, and he is able to evoke the atmosphere of that environment in a captivating way.
The track titles leave no doubt: The Pole Of Absolute Coldness, The Boundless Snows, Approaching Storm, The Desert Of Ice And Loneliness…
Soundscapes move as slow as the melting ice caps, the rumbling low frequencies reminding us that we only see a fraction of it, most of it is hidden. The environment constantly changes, even though we cannot see that. 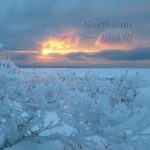 Northaunt (Hærleif Langås from Norway) is preparing us for the third Ice Age. Or his third Ice Age, since Istid III is the follow-up of his 2015 release Istid I-II.
The new album found a proper home on the Glacial Movements label, the label specialising in music about ‘places that man has forgotten…icy landscapes…fields of flowers covered eternally with ice… Icebergs colliding amongst themselves…’

Northaunt started his Istid series to imagine a world of silence before man existed. The icy landscapes that Northaunts paints are built from isolationist minimalism. The landscape is cold and frosty but not as desolate and hostile as in Ugasanie’s Ice Breath (mentioned above).

There is some nostalgic beauty in these soundscapes, as well as a ray of hope – as symbolized on the cover by the sunlight breaking through the clouds. Slowly the desolate infinity of the abstract soundscapes changes with the introduction of ‘shy keyboard notes’.
“… we can now imagine man is about to start his lonely quest for meaning in the desolation.” 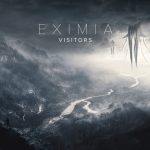 From the alienated landscapes of the poles to an imaginary landscape invaded by aliens may not be a very big step if you use your imagination.

Eximia (Dominik Ragančík, from Slovakia) pictures the invasion of Earth by alien visitors, and by the look (on the cover) and the sound they are not here to make friendly contact.
Visitors, his debut album on Cryo Chamber, is full of frightening sounds: thunderstorms and lightning upon the descent of ‘our new gods, who came without warning’, dogs barking in panic upon first contact, people crying and screaming in agony upon their extinction.

“Our weapons pointless against these behemoths covered by storm. When I lay my eyes at their divine beauty in all it’s power and destruction, I feel no anger nor sorrow, I feel awe. ”

Music can hardly be more cinematic than this: close your eyes and you’ll see the movie that goes with it (be sure to use a good speaker setup or a quality headphone set for maximum effect!). Visitors is the musical equivalent of a horror-scifi movie. But unlike most Hollywood productions there is no happy end to this story: the closing track of this album is titled World Without Man.
I’ll leave it up to you to decide whether that is a good or a bad thing.