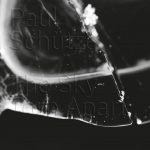 Paul Schütze‘s discography dates back to the late 80’s. His work is not restricted to sound/music but also covers photography, video and installations. And if that is not enough he also launched a perfume, introduced olfactory elements into his artwork, and runs the ‘online sensory archive’ Dressing the Air – an ‘open resource that aims to enrich creative thinking by encouraging a multi-sensory approach’.
He has released many interesting solo albums, but also collaborated with well-known artists like Bill Laswell, Lol Coxhill, Toshinori Kondo, Max Eastley, Jah Wobble and David Toop (just to name a few).

It is good to see a release by such a veteran artist on the relatively new Glacial Movements label. As with all of their releases, the music is heavily ‘Nordic’ and ‘Glacial’. It is a direct comment on climate change, dealing with “our anthropogenic environmental transformation”, a reflection on the Nordic myths of Ragnarök – “in which the earth is subsumed by water as a consequence of divine conflict.”
A haunting environmental 57 minute drone, ever-changing surroundings, with the sound of water omnipresent.

Dark, foreboding, but not without hope. After all, “In the myth, the world emerges from the waters reborn and purged.”
Near the end of the record, the atmosphere is refreshed and you can hear the sound of new and refreshed life emerging. Whether the human race may still be a part of that environment remains a mystery for now. 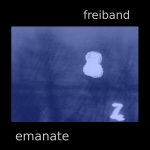 Not many introductory notes accompany this release on Kim Cascone’s Silent Records:
“A wonderful drone based ambient album by this Dutch master. Guaranteed to transport you via headphones to wondrous realms.”
Well, what could I possibly add to that?

Freiband is one of the many aliases of the ‘Dutch Master’ Frans de Waard, also known from his Vital Weekly reviews of experimental electronic music (‘the oldest online source for music reviews’) and involvement in the Staalplaat label.
Although Emanate is a digital-download only release, the piece is presented in two parts, of 35″ and 25″ respectively. The drone piece is started without any introduction, as if it is simply ‘switched on’. But from there, many things happen – the sound environment constantly changes, swells, softens, introduces new elements. Perhaps that’s the relation to the title: every new sound seems to emanate from the previous moment.

The subtleties of Emanate are probably best experienced when listened on headphones, but when played on speakers the pieces have a profound influence on the listening environment too. 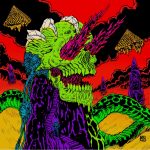 Dead Neanderthals present themselves as the “New Wave of Dutch Heavy Jazz”. The duo (Otto Kokke– saxophone and René Aquarius – drums) combine “elements of grindcore, noise, jazz, and other genres”, and thus create a unique and confrontational sound.
A sound that is not always easy to digest – intentionally. There are many great examples but one good way to hear what they are able to do  is their latest collaboration with Machinefabriek, as DNMF. I guarantee “Smelter” will catch you off-guard with its hard-hitting “highly dynamic amalgam of metal, drone and dark ambient.”

But in fact that is not the release I wanted to present here on Ambientblog, even though I recommend checking it out if you are into the combination of  heavy noise experiments and free jazz.
“Life” is something quite different. It’s a 36 minute drone, no more no less. No drums, no sax (at least not recognisable).
The sound starts suddenly, without introduction, as if someone simply hits the Play button. And from there the sound continues until the end of the album, with hardly any changes in it unless you listen with a microscopical attention to details. And after 36 minutes it simply stops, as if the machine is turned off. It is like the hum of a hundred generators, directed by a ‘machine that goes ping’. An industrial drone, nothing organic, but still it seems to refer to a life-pulse. The machines we need to keep us going, the cyborgs that we have become?

Well, whatever you make of it, I guess: there is no explanation or interpretation included. Nor is any needed. This is a sound to be enjoyed while it lasts. And in that kind of ‘enduring mindfulness’ it somehow feels like the opposite of what the Dead Neanderthals usually present. But those who know them also know that surprises can be expected at any time.