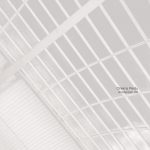 There is definitely something ironic in the fact that I listen to this album when commuting from home to work and back, listening with a noise-cancelling headphone that shuts out the background sound of the train, the people and the station…. to listen to music featuring sound of trains, people and (Amsterdam Central) Station.
On the other hand, it is good not to be distracted too much, and thus be able to hear how subtle Cinema Perdu (forgotten cinema – Martijn Pieck) has incorporated these everyday environmental sounds into his (six) drone pieces.

Everyone that travels by train will immediately connect to these sounds, while at the same time they are unique for the specific acoustics of Amsterdam Central Station: the different roofs, the three tunnels with access to the platform, the ‘IJ-passage’.
Still, it is not “a pure registration of the sounds. It are not literal compositions of the rooms. It is my (Martijn Pieck’s) interpretation of the atmospheres the spaces create with the recorded sounds. I walked around with my recorder in the hand slowly from space to space through Amsterdam CS, sometimes standing still, observing and recording the experiences at this specific moment in time.”

Amsterdam CS is primarily a musical album, not an environmental aural documentary. The recorded sounds help create the atmosphere for the drones they go with.
Overall, it is a relatively quiet atmosphere: definitely not the hectic noisy rush hour unrest I know from my own commuting experience. That is probably why at first I thought the titles of the tracks referred to the time of day the sounds were recorded. Which oddly seemed to be (very) early in the morning or even in the middle of the night.
Looking again, I noticed that the titles are simply stating the duration of the tracks.

Amsterdam CS is a beautifully cinematic drone album. As could be expected from an act called Cinema Perdu. 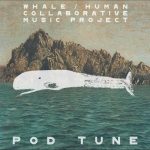 Please take a moment to think about “a musical collaboration between humpback whales and ambient composers.”
[…]

I think many of you now have associated this with new age recordings by anonymous artists, the kind of CD’s often found in rotating displays in souvenir shops in nature parks. Didn’t you? I know Í did.
But in this particular case, that framing is wrong.
Yes, there are sounds of humpback whales singing. The whole purpose of this album is to support organisations the work on behalf of whales and preservation of the ocean: net proceeds from the sale of this (digital) album go to Ocean Alliance and Blue Mind.

But one always has to look beyond one’s preconceptions and prejudices… As I learned myself when looking at the contributing artists on Pod Tune. I didn’t expect to find music from highly esteemed artists like Loscil, Roly Porter, Christina Vantzou, Jacob Kirkegaard, Eric Holm and William Basinski on this album (along with some artists I am not familiar with).
Not exactly the average ‘anonymous new age composers’, indeed, and consequently (in the words of the accompanying text with this release) the music is “expansive, otherworldly-yet-accessible, soothing, and inquisitive (and never new age-y or eco-schmaltzy).” (I definitely like that last word!)

By the way: I found out that this album was already released in november 2016 and so it has been around for some time. I don’t usually post recommendations of older albums but I decided to make an exception for this one. Because of my surprise about the line-up, but also because the oceans are rapidly detoriating and need to be cleaned from plastic. Not only for the whales but for all creatures that live in it (and for creatures like is that don’t live in it too).