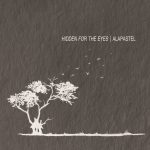 ALAPASTEL – HIDDEN FOR THE EYES

Until now, James Murray is primarily known for his own impressive discography, released on his own Slowcraft label. He also released and produced beautiful albums with his wife Anne Garner as well as different collaborations, such as My Home, Sinking. (While on the subject, don’t forget to check out his beautiful performance at Fluister which can be found [here] and can be downloaded for free).

But it doesn’t stop here: he’s now also the proud owner of a brand new label series called Slowcraft Presents. The inspiration for starting this label came from the music of the Slovakian composer Lukáš ‘Alapastel‘ Bulko, whose Hidden For The Eyes is the first release of this promising label series.
As far as I know, this is also the debut release of Lukáš Bulko, who took his time (eight years) to come to this result.

There is something mysterious about this album: but it is quite hard to pinpoint what it exactly is.
The first association is that it present ‘modern classical’ music, but it is quite far removed from the contemporary classic albums that have defined the genre. It is as much ‘electronic’ as it is ‘classical’ even though the electronics are somewhat hidden in the overall sound. And then there’s the vocals in about half the tracks, performed by Alex Lukáčová and Marián Hrdina. Sung in a language you (or most of you) won’t understand (a link to the Slovakian folk roots), unmistakably present but not very prominently mixed so as a  result they feel very improvised and natural – not classically trained as you might expect in a setting like this.

To be short, this release is definitely something different.
And that probably is exáctly what triggered Murray to release Hidden For The Eyes as the first in a new series “of exceptional, unclassifiable music offered in carefully handcrafted limited editions for people who treasure beautiful audio artefacts.” A promising start for a label with an auspicious mission. The bar is set rather high from here!

I hope, that if we are able to uncover the profound beauty of things, that seem to be hidden, it is possible to become more humble and appreciative of life around us.
(Lukáš Bulko, 2018) 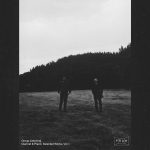 I don’t usually read the information that comes with promos before listening to the music a few times. This way I try to listen to each release without context, regardless of the artist’s history, try to hear it as if it was a debut album by an unknown artist.

When I listened to this Group Listening album, I definitely enjoyed the music but still decided it was not something for Ambientblog. Because it didn’t sound like ‘ambient’ in any way.
Covering the area somewhere between jazz, modern classical and light experimental music, there were vague references to Simon Jeffes’ Penguin Orchestra. Which is a recommendation in itself but not necessarily music for Ambientblog.

However – there was something strange about these arrangements. Some fragments seemed strangely familiar but I could not tell why.
I realized what it was when I got halfway and recognized the theme of Julie With…, a Brian Eno track from Before And After Science that I literally played to death ever since its release in 1977.
Only then it dawned on me, and I realized that I should have known right from the opening track called Wenn Der Südwind Weht – an equally archetypical Roedelius release from 1981: these were (almost unrecognizable) rearrangements of ambient/experimental tracks.
And, in fact, an amazing selection it is, too!

Group Listening is a project by Stephen Black and Paul Jones, who met at music college but since then went their own musical way: Stephen into pop and Paul into jazz. Meeting again after years, they shared their love of music – ambient music among many other genres. The main instruments on Clarinet & Piano: Selected Works Vol. 1 are piano and clarinet (duh, obviously), but while post-production and overdubs are kept to a minimum, their instruments are ‘passed through guitar stompboxes and other analog effects to enable processing and manipulation directly in performance, while mbira and drum machines are sparingly deployed amid enveloping folds of space echo..”

Apart from the Roedelius and Brian Eno tracks mentioned, the collection features tracks from Arthur Russell (A Little Lost), Robert Wyatt (Maryan), Euros Child (The Dog), Steve Roach (Snow Canon), Disasterpeace (Jay) and Raymond Scott (The Happy Whistler). You’ll probably only recognize them if you’re familiar enough with the original version because these tracks are “shot through Group Listening’s electro-acoustic lens, these works evolve into something supremely calming, poignant and new.”