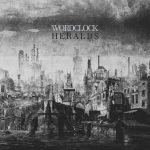 Even if this is his third album for the Cryo Chamber label, this is quite an a-typical release for the label that specialises in ‘cryonic’ dark ambient. True: its atmosphere is quite dark, overall, and there’s an occasional Bell Ringing, but with its jazzy neo-classical sound it differs from most other releases on the label.

Wordclock is the alias of Pedro Pimentel from Porto, Portugal. He is “influenced by a wide range of music and ideas, often gathering from religious music and experimental electronic minimalism”.
For Heralds he sought inspiration in old European ‘sacred sites’ of Porto, London and Berlin, recording acoustic instruments and field recordings within the cities. The recordings were completed with the help of Amund Ulvestad (cello, electronics), Nuno Craveira (Nyckelharpa) and George Shmanauri (member of Phonothek, trumpet).

The electronics play an important, but supporting role. Heralds almost feels as an acoustic ensemble album, exploring the area where (post-)classical music meets dark jazz.
It is exactly thát combination where the music on this album is different from many other recent neo-classical albums. 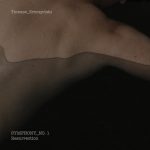 With only a violin and a sampler Polish artist Tomasz Sroczynski presents a full-scale symphony in three majestic parts: Moderato, Largo and Allegro.
It’s almost impossible to find some information about the artist (apart from the fact that he is or was also part of a trio), the release lacks any background information. So we’ll have to do with just the music – and in fact that’s all we need to be impressed!

Using minimal means to create maximal results, Sroczynski transforms the sound of his violin into a full-blown orchestra, increasing the tension with every part of the symphony. The only reference given is a quote from the Tibetan Book Of The Dead: “Every adult knows that many of our experiences can be compared to death during lifetime and that we die multiple times.”

Dying ‘multiple times’ must mean that there are (almost) as many times we come back to life – hence the theme of this symphony: the struggle to get back to life.