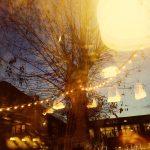 Take a moment to contemplate on this concept before you start listening to the album: Microscale is a web-based generative album, intended for online listening.

If you open one of the 4 numbered links on the webpage (above right), you’ll see six random texts taken from Wikipedia. In a mysterious way (or maybe not too mysterious if you’re able to read code: the source code is available) the texts are transformed into music.

As explained (in the aptly named WTF-page):
“Each article becomes a step sequencer, where the letters are the sequencer steps and the track titles are regular expressions that switch the steps of the sequencers on and off. For example, in the expression “[module]”, it’s the letter “m”, “o”, “d”, “u”, “l” or “e”. When the sequencer position lands on any of these letters, it fires an event and plays a sound, and the letters become the “microscale” level of the meaning of the text.”

I’m not tech-savvy enough to totally comprehend what’s going on behind the screen, but it’s fascinating enough to watch the composition scroll through the text letter by letter sometimes pausing a while to let a sequence repeat itself for a while before it returns to the text and moves on.
Each of the four composition has its own recognisable characteristics, but the details it uses are different every time you press the refresh button.

“The concept behind Microscale is to show that through transforming one media (text) into another media (music), the meaning can be transformed – the article has its own meaning, but the music generated from the article has a completely different meaning. And it’s not just one-to-one transformation – there are six articles (i.e. six meanings), which although unrelated to each other, create a whole piece of music that has one singular meaning.”

Ales Tsurko is a composer and programmer from Belarus. The music for this project was created using the Eera synth he developed himself: a monophonic synth created for use with an iPad. A synth that (in this case) generates nice sci-fi like electronic sounds

If this conceptual generativeness is a step too far for you, Preserved Sound also offers ‘fixed’ one-time renders of the music: the CDR- and download version are individually rendered instances of the random generated composition. For the CDR-version this means that every single version is unique and different from all others.