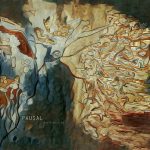 The Dronarivm label never ceases to amaze with their constant stream of great album releases.
Pausal is a duo featuring Alex Smalley (aka Olan Mill) and Simon Bainton. Avifaunal is not their first album: the duo have considerable experience in various projects and releases on various labels, but it’s their first release for Dronarivm.

The album starts with the three-part Murmuration, which came to life from experimenting  and improvising with a new equipment setup including looped turntable, voice microphones and synths. The three other tracks were also edited and assembled from parts of the same recording sessions.
Renting a local hall for their sessions provided the opportunity to work at far louder volumes than usual (check Murmuration III).
But that does not mean this is just a lot of noisy  ‘power ambient’: it is as subtle and sensual as usual.
Music with as many colours as on the cover image. 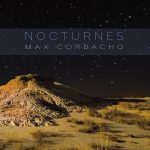 If you read the title you know this is night music – music about the night, to play at night. “The magic time in which shadows blur shapes, colors and along with silence and stillness induces a state of special perception.”

Inspired by several sessions of night photography in the last years, Max Corbacho creates three tracks: Dark Sky Opening with a full-album length of 52 minutes (divided in three parts), and Stellar Time and Ghost of the Moon each around 10 minutes.

This is classic, ‘spacey’ ambient, multi-layered free-flowing synth pads along the vein of Robert Rich/Steve Roach. Music to drift away by, imagining “silence, stillness, the twinkling light of the stars and the sweet fragrance of thyme that impregnates everything in these regions of Aragon in Spain”, where Corbacho had his inspiring photography sessions.

Nocturnes is the first of a trilogy dedicated to “a new world, hidden before the sunset”. 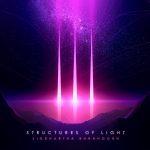 Siddharta Barnhoorn may perhaps not be a familiar name to you, yet he can boast an impressive catalogue with over 70 musical scores for films, documentaries, commercials and more. He also scored the music for the games Antichamber and Out There.

Apart from his soundtrack works, he previously released Pillars of Light, and now his second full album: Structures of Light – “a personal project where I reconnect with my love for creating deep ambient music.”
And deep ambient music it is: classic unhurried, immersive ambient, created using vintage analog synths and a eurorack synthesizer. Compositions varying in length from around four up to 21 minutes, but all sharing the warm, somewhat ‘retro’ sound.

There’s a remarkable link to the Max Corbacho album mentioned above, in sound as well as in concept:  this album emerged from “evening walks in the dunes and late night recording sessions in the studio.”