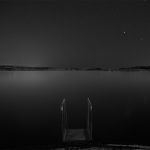 In its relatively short existence (almost 4 years), the Hibernate label has presented us with many beautiful releases and positioned themselves as one of the most important independent labels at the very centre of the ‘ambient’ music scene. Or – since it’s increasingly difficult to use the word ‘ambient’ as a genre definition: music “both abstract and melodic but always with a hint of melancholy.”

The Hibernate label kicked off in 2009 with a release that set a high standard immediately: “Wolfskin“, by Ian Hawgood – well-known for his own music as well as from the labels he curates: Home Normal and Koen Music.

As the slightly changed album and track titles suggests, this is not merely a ‘cover’ album of the original. The tracks take their inspiration from the original album, which “referenced a series of nightmares Ian had as a child, focussing on elements of dreams and violence by marrying beauty with the harsh.”

“Wolven does not just portray the original recordings from Wolfskin in a different light – it also takes another look at the concept of dreams and nightmares. This time, the album strives to literally tread the pathways in Ian’s dreams – not without its terrifying moments along the way but always accompanied by a comfort pillow to keep you from harm.”

On the first CD of this 2CD set, Aaron Martin‘s cello takes center-stage and sets the (rather dark) mood. Embedded in layers of organ, keys and guitar fed through various tape reel machines, and mixed in with interpretations by Dag Rosenqvist, Spheruleus, Pillowdiver, y0t0, and Hakobune, the music easily and almost naturally shifts from ‘post-classical’ acoustics into abstract electronic soundscapes.
With “The Dance”, it takes off with exactly the same chord that concluded the original Wolfskin album – sticking close to the original concept and atmosphere, but at the same time a completely different, new, approach.

For the second CD, Brock Van Wey (aka bvdub) chooses a different approach. His characteristic bvdub sound creates a different, somewhat lighter atmosphere: three extremely long (24 – 32 minutes each) tracks with layers upons layers upon layers of (stretched and dubbed) samples, slowly accumulating – somehow his music always makes me feel as if my head (as well as the room around me) is filled with sound until there is not a empty space left….

If you know the original Wolfskin album, it is of course interesting to compare the details from these tracks to their original sources. But it is not necessary to know the original album to fully appreciate this new reworking, as it presents an inspiring set of different kind of contemporary ‘atmosphere music’.

Note:
Hibernate is releasing the physical 2CD-version, while Komu offers the digital download version of the album.
The release date is set for May, 19.