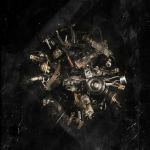 His past catalogue and  (maybe even more) his live performances have shown that Greg Haines manages to combine artistic consistency with surprising changes of directions.

One never knows what to expect, but one can always rest assured it will be good..

On a first listen, “Where We Were“, Haines’ new release on Denovali Records, sounds surprisingly different from what he has done before.

The sound on this album is heavily based on the use of “tape-worn synthesizers” – “any recordings of piano have been transformed and affected until their sound is at times barely recognizable”.

The overall sound is created with (analog) synths this time, more prominent than ever. But on a closer listen the compositions all clearly have the Greg Haines mark!

The way the compositions are calmly introduced but inevitably lead to sometimes ‘post-rockish’ eruptions may be directly linked to “Digressions“ – the preceding album which was equally jaw-dropping – but they are entirely different in instrumentation. Check “So it Goes” to hear what I mean.

These are interesting names because they are not very obvious and maybe not even very clear, musically. But what all of these artists have in common is that they did not yet have the technical means that are currently available, digitally.
It was impossible for them to precisely aim every detail of their music to the perfect right spot, which gave their music a somewhat random, improvisational, but above all human feel.

And that may very well describe exactly what Greg Haines manages to do here: avoiding the pitfalls of perfectness, and keeping the instantaneous moments of wonder.
“It is all in there, or at least what’s left of it after the hiss, the dirt and the degradation of the tape machine destroyed it, reworked it, and spat it back out fully formed.”

GREG HAINES – SO IT GOES