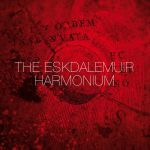 When hearing the first notes of “The Eskdalemuir Harmonium” by (Scottish) composer Chris Dooks – created together with Machinefabriek – and reading the album’s liner notes, one thing is very clear: a Harmonium is a strange and fascinating instrument.

“Accumulated dust causes constriction of the tubes, narrowing the airways like an asthma attack. Keys can stick, as can internal mechanics. Things can snap off, rupture. A lung can collapse or be torn open.”

“I catch myself assigning human properties or illnesses to it, calling it arthritic and asthmatic. It can also be grumpy and stubborn depending on the weather.”

Discovering two harmoniums (“one kept warm and dry, the other allowed to decay in a barn”) in Eskdalemuir, Chris Dooks immediately felt attracted and started to record their sound.

His affection for the harmonium, as described above in the quotes, may come from the fact that he himself is suffering from M.E. Currently he is working on his PhD “revolving around creative responses to chronic illness”, so I guess finding these instruments was an unexpected gift.
A gift shared on this beautiful red vinyl LP. (The digital download, also included with the vinyl purchase, also includes an extra 3-track EP: “Non-Linear Responses Of Self-Excited Harmoniums”).

Most of the tracks are recorded on the “well-preserved” harmonium, but the tracks from the ill and decayed instrument might be even more touching. Obviously, no attempts were made to edit out the creaking, asthmatic sounds since they are important additions to the organic feeling of this instrument.

In their collaborative work on the final mix, Chris Dooks and Rutger “Machinefabriek” Zuydervelt made sure they treated the sounds as if they were field recordings.
“This is a site-specific project and I wanted the site to be heard in the results.”
The second album track (beautifully titled “Betamax and Dictaphones”) even takes this to an extreme by featuring a recorded interview with the owner of the harmoniums. Personally, I think the placement of this spoken interview track somehow breaks the spell between the others – it would have been better placed at the end of the extra EP if you ask me. (When playing the digital download that is no problem at all, of course.)

Though this music may be labeled ‘experimental’, it is by no means ‘electronic’.
‘Organic’ definitely is a better description.

“The Eskdalemuir Harmonium” is a remarkable personal statement celebrating an instrument that definitely nót deserves to be left to decay in a barn.