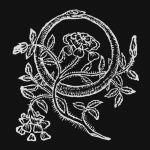 From the very first minutes of “Ivan Hoe and Other Tales“, you will realise that this is not gonna be like one of your average atmospheric drone albums.

Starting with a spoken voice recording, taken “from old tape cassettes for English summer homeworks” and telling tales about the ancient Saxons from Sherwood Forest, the album shifts into “a journey into an almost cold, dark and ‘aseptic’ forest, ending with a come-back to a warm home”.

Atmospheric it is, sure enough. But even more, “Ivan Hoe and Other Tales“ is a weird sonic trip, unravelling some of the tales that were kept secret by the old oaks of Sherwood Forest…

The tales about Ivan Hoe (main character of Sir Walter Scott’s historical novel about 12th-century England) are English in every detail, so it may come as a surprise that The Volume Settings Folder is, in fact, a project by Italian guitarist M. Beckmann.
Adding ‘guitarist’ to his name may be somewhat superfluous, because the guitar fragments on this album are hard to recognize in the wealth of other collected and manipulated sounds.
Beckmann ignores any existing convention in combining field recording to sound effects, distorted rhythms, hiss and crackles – and presents them glued together as one organic collage.

At the end of the second track, the tale about Ivan Hoe is once again told, telling about Ivan Hoe’s love for Lady Rowena, and how he must’ve been knight of King Richard (‘perhaps the bravest’ ). But for the rest of the album the other tales are left up to your own imagination.

It may be because, as a child, I was a dedicated follower of the Ivanhoe TV series. Or the fact that I visited Sherwood Forest (also the home of Robin Hood, of course) last summer and have watched the enigmatig thousand years old oaks dying.
But I think it’s mainly the wide array of dreamlike sounds that make this album so very fascinating.
It’s simply hard to imagine what exactly you are listening to!

In style with the original source of inspiration, this album is released as a cassette edition in various package collections. Apart from the cassettes, there’s also a choice of CD-R’s in various editions – and recently the digital (unlimited) edition also became available.
Enough to choose here (but note the physical editions are extremely limited)