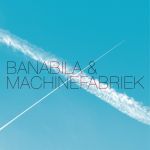 First: check my last.fm profile so you know that I’m not entirely ‘unbiased’ when reviewing this release.

Michel Banabila and Machinefabriek are firmly at the top of my all-time favourite artists chart (well, to be exact: counting of ‘all-time’ started at 2005 when I “went digital” in listening music).

Both have been extensively featured on this weblog (just do a search on their names to dig deeper) – even if that covers only a small part of their output.
Considering their complete discography, it seems their output is quite different in style – yet their work also has some overlapping areas, especially when it comes to “gritty” electronics.

Knowing they both live in Rotterdam, it was clear that they should meet sometimes. I’ve been waiting for that to happen, but I had no idea if their collaboration would work and what the result might sound like.

So imagine my surprise when, without any introduction or announcement, their collaborative album “Banabila & Machinefabriek”  was announced recently.

I can assume that neither Banabila nor Machinefabriek need any further introduction for readers of this blog.
Both are prolific pioneers in the dutch electronic music scene. But, since both can also have quite a different musical focus, it’s interesting to see where these ends meet when they are working together.

When they finally met, the spark obviously exploded into a flame: “We agreed to start slow, and then really kick it off early 2013. But in all our enthousiasm, we quickly got caught up in an unstoppable workflow. Swapping files back and forth, layering and processing each other’s sounds, it immediately felt like a match made in heaven. In an incredibly short, though highly inspiring time span, the album ‘Banabila & Machinefabriek’ was created.”

On “Banabila & Machinefabriek” , their shared interest is in creating abstract electronic soundscapes, with a dynamic range varying from immersive calm sounds to noisy eruptions. This means their album is not exactly ‘easy listening’, it can be a challenging but adventurous listen.
The opening track (‘Ascend’), may have some subtle hints to the use of ‘real’ instruments, but from there the album quickly moves into electronic territories.
But: things never really get out of control: Banabila (29+ albums since 1983!) and Machinefabriek  (42+ albums since 2004!) are experienced enough to carefully balance their input to maximum effect.

Their interaction is immaculate: it is surprisingly hard to distinguish the Banabila elements from those added by Machinefabriek. The sum of their contribution is definitely “more” than just both separate parts.

Considering some of the noisy outbursts in Bad Wiring and Dead Air, this album may probably not be to anyone’s liking. But everyone else – especially those who know the previous works of Banabila and/or Machinefabriek – should definitely check out this release!