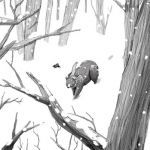 Okay: Christmas and New Year’s Holiday are rapidly approaching – you’ve probably already had your share of the End-Of-Year Top 2000 lists (full of unsurprisingly position shifts of headliners like The Eagles and Queen) – Your “Last Christmas” and “Imagine”  singles are totally worn out – as has “Phil Spector’s Christmas Album“? Even the ZE Christmas Record (featuring Suicide!) is not surprising anymore?

Enter: “Festive Greetings from Hibernate and Home Normal”  – and be prepared for some surprises!

Two of the influential ambient/experimental labels, Hibernate and Home Normal have teamed up to create a 17 track festive collection.
The CD version will be a free giveaway at the H&HN Christmas Show in London (dec. 18, 2011). But if (like me) you don’t live anywhere near London there’s no need to worry: you can play the Mixcloud mix featuring all tracks of the CD, ór you can download the digital version from Bandcamp.

That last option may be the best and most appropriate for the season, because 100% of the proceeds will go to the Archway Foundation, established in Oxford in 1982 by Paul Hawgood “to help serve those hurt by loneliness”.

Some of the tracks are abstract compositions, others take inspiration from (or refer to) traditional christmas carols (to some strange effects, in some cases).
But all have a nice festive feeling, bringing calm into your house even when heavy snow storms may rage outside.