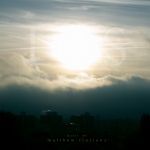 Matthew Florianz is one of the dutch artists I have been following for a lot of years now – together with fellow experimenters like Rutger ‘Machinefabriek’ Zuydervelt, the ‘Piiptsjilling’ (Kleefstra) brothers and Michel Banabila.
It’s funny mentioning them together, because their music is quite different. But all have their own definite ‘brand’ that identifies their music, all work tirelessly on their music, and – finally – all get international recognition for their works’ quality.

From these artists, Matthew Florianz (who started recording as ‘Liquid Morphine’ around 2000) may be the one whose music remains most close to the origins of ambient music as defined by Brian Eno.
In musical style, I mean, not regarding the ‘generative’ compositional aspect of much of Eno’s music. Florianz carefully constructs his music, paying attention to the placement of every little detail.

Most of his earlier releases were issued on the H/S Recordings label, but (like the previous album “Koude Handen“) “Los”  is self-released and offered as a (FREE!) digital download. It is available in MP3 as well as 24 bit FLAC format (which of course offers greater audio detail).

Working as a sound designer for various games (listen to the Spellborn mixes for an example of one of these games soundtrack), Matthew Florianz is a master in creating atmospheric surroundings.

The opening track “Zucht” (or ‘Sigh’- all track titles are dutch words) sets the atmosphere: wide, dark, deep rumbling lows like some distant thunder rolling in – is threatening and comforting at the same time.
This immensely wide atmosphere is kept throughout the album, gradually lightening up in the middle with the introduction of some bright piano sounds in ‘Snijd’.

Though this is 100% electronic music, Matthew Florianz’ music always has a close relation to nature, conjuring landscapes that could be real as well as one from your dreams. Look at the cover and you might have an idea what this music sounds like. Unlike most of his previous recordings, however, “Los” does not contain any environmental recording at all.

In this day and age, it is quite difficult to get any album heard and find the right audience for it. If you have heard any of Florianz’ music before I don’t doubt you’ll find (and enjoy) this one too. But if his name is new to you, please give it a listen – it definitely deserves to be heard!
Should be no hard decision at all, since it’s free to download in both versions!