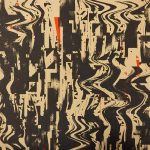 After Safn 2006-2009, Processes & Potentials and Paths, this is the fourth full release by Bjarni Gunnarsson, and it is no coincidence that each of them are recommended here at Ambientblog. I’m a dedicated ‘fan’ of the sound of the Icelandic composer (now based in Den Haag, teaching algorithmic composition and computer based music at the Institute Of Sonology).  Not only for his impressive albums but also after seeing him perform live (a part of this particular live-set can still be heard on this Concertzender recording of the Fluister show).

Gunnarsson has a distinct personal sound signature that is hard to describe. It is not at all ‘ambient’ because there are many layers of noise, yet the electroacoustic compositions are calming in their own way. The ‘exploration of process as much as tone and texture’ uses ‘generative processes that often appear directly entangled, that are set in motion and activated while maintaining their own degree of autonomy.’

Lueur (‘glow’) refers to ‘faint, quiet but unsteady light sources’. The four compositions on this album follows its own ‘unpredictable’ path, ever-changing paths with a lot of adventurous sounds. But they fit together very well – it is not a collection of conflicting extremes. It’s a bit like walking through a forest , observing every detail, without losing sight of the complete picture of the forest. (If this sounds like gibberish to you, I suggest you start the Bandcamp stream and listen for yourself.)

For vinyl collectors: the vinyl’s sleeve artwork is ‘procedurally-generated’, meaning that ‘variations of each layer are combined to make 16 unique sleeve designs.’

A few months before Pauline Oliveros passed away (November 2016), Edu Comelles commisioned a concert by accordionist Isabelle Latorre meant to be a free musical interpretation of Oliveros’ ‘Deep Listening‘ theories. The concert, premiered at the Ensems Festival early 2017, thus became a very special tribute to the life, work and philosophy of Pauline Oliveros.

Latorre’s performance takes up side A of this cassette release on Crónica.  It’s a single 22 minute piece that starts with quiet prolonged notes but slowly builds up to an emotional climax and then slowly releases its grip again. Not often you will hear the accordion played this way – unless you are already familiar with Oliveros’ work, of course.

For La Isla Plana, the second piece on this cassette, Edu Comelles sampled Isabel’s instrument and arranged the samples into a completely different composition. He connects the recorded samples using a Shruti Box to create a background drone La Isla Plana sounds organic (because of its sound sources) and detached at the same time.

A very honest, heartfelt tribute to a legendary artist, who taught us the art of ‘deep listening’.