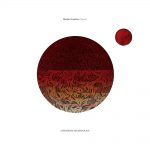 The disclaimer, as usual, is that the vinyl version edition has sold out quickly (note: see last remark below).
There’s no CD edition of this A Strangely Isolated Place release, so if you missed the earlier announcement you’ll have to do with the digital download or streaming options. But don’t let that fact withhold you, because Empire may very well be one among the most engaging ambient albums you’ll find this year.

About half of the tracks on this album (4 out of 7) are Markus Guentner solo performance tracks, exploring “sometimes sinister, but always majestic territories with his unique manipulation of looping drones, textures and gradual atmospheres.”
These tracks are alternated with collaborations with different artists: Julia Kent (cello), Tom Moth (harp, known from Florence and the Machine), and bvdub. Their different instrumental input does not break the atmosphere of the solo tracks – on the contrary. It is as if the course of this album is meticulously planned to tell a story, like a book or a movie. This is what makes the album is interesting from the first to the very last minute and can best be heard in full in its original sequence.
With the input of his collaborators, Guentner manages to avoid the ‘sameness’ many ambient albums suffer from while at the same time telling a coherent story that involves many emotions. Sometimes dark and sinister, exploring emptiness, but also melancholic, exploring rays of hope and even joy.

“Be it physical, scientific or mythological, Empire draws on the ebb and flow relationship the Earth has with the deeper, unknown space around us.”

I usually try to avoid overly exaggerated qualifications about albums, since all is subjective and in the ear of the beholder. But I dare say this a landmark album. One for the history books.
Ánd at the same time one of which the physical edition sold out in two weeks after release date… I suggest ASIP to start considering a re-press.

(note: shortly before publishing this a few last copies have become available again on Bandcamp and Juno… so don’t wait too long). 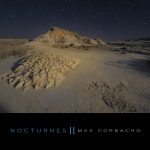 If you enjoyed 2017’s Nocturnes, here’s the follow-up for extended nightly explorations. On this second part of the trilogy dedicated to “a new world, hidden before the sunset”, Max Corbacho presents seven tracks of atmospheric soundscaping – “sound meditations” that “burn slowly, like the light of a distant star, illuminating a breathing, ghostly landscape”.

To make sure the atmosphere was right, Corbacho thoroughly tested them:
“During the creation process, in my checks during the recording, mixing and mastering, I submerged myself in the quiet meditation and silent isolation of the night in the middle of nature to verify the effect by myself each time I completed a piece or made a change.”

Perfect for nocturnal listening of course, but a great pleasure to listen to in the daytime, too:
“Nocturnes II can be enjoyed at a background level, accompanying the listener’s daily tasks, or in a more active listening at a high volume creating a powerful and visceral experience.”