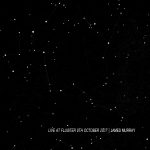 I guess it’s no secret that I’m an admirer of James Murray‘s music – as you can tell by the recommendations on Ambientblog.
So I was very happy to attend one of his rare live-performances as part of the Fluister series in Tivoli Vredenburg, Utrecht (my hometown!) – a double bill with Sylvain Chauveau.

Fluister means ‘whisper’, and Luister means ‘listen’. The F/luister concert series is dedicated to ‘intense listening’, often (but not exclusively) programming electronic/ambient music. Its niche setting means there usually is a a small but dedicated audience.
And dedicated means: quiet and attentive. (Which is a relief, considering the recent discussions about audiences chatting noisily as if they don’t care about the band that is playing).

Murray started extremely quiet, and throughout his (33 minute) set you could literally hear a needle drop. The mutual respect allowed him to take the time to develop his set in a very restrained and unhurried way. It may be one of the most difficult tasks when playing ambient music in a live setting: not giving in to the temptation of constantly introducing new events and triggers just to keep the audience’s attention, but doing only just what the atmosphere needs.
I guess it takes guts to restrain yourself in front of a live audience…

It was a pleasure to watch (/hear) Murray build his set from nothing up to a guitar chord ‘climax’ and then abruptly ending the performance. It was a real ‘live’ set: not just a man behind a laptop doing incomprehensible things, but interacting live with a computer using contact microphones (in many ways, such as the foot thump rhythm later in the set), guitar, toy piano, and whatnot.

The set feels like one single composition, but is built mainly from fragments of his latest album Heavenly Waters. There’s a fragment of The Sea In The Sky, too (Settle) – as well as some new sounds not on album.
Did I already mention I really enjoyed his performance? 😉

Of course there’s a reason I spend so many words on this (I don’t usually post concert reviews here): this performance was recorded directly from the mixing desk, and James now made it available as a name-your-price download on Bandcamp! So it’s available to hear for those that were there, and for the many more that weren’t.

It’s a free download if you want, but of course you’re invited to pay a little donation if you can.
After all, the downside of intimate concert series like this is that there are too few visitors, and no-one makes any money out of, so it’s getting harder and harder for venues to program performances this  – since, well, after all, it’s all about the money. But sometimes, it’s not.