With his impressive back catalogue, Monty Adkins has become one of my favourite artists (if you’re not familiar with his work, don’t forget checking out Four Shibusa,  Rift Patterns, Borderlands and Unfurling Streams).
So it’s great news when two new albums are released almost simultaneously: 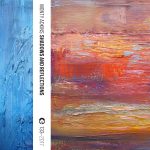 The first of these two is Shadows And Reflections, released on the Crónica label in a cassette and download version.
(No CD version to my regret, since I think this album deserves a ‘proper’ release with a better sound quality than the cassette tapes can offer. But, judging on their latest releases, tape is the medium of choice currently for Crónica.. Of course ordering the tape also includes a high-quality download too).

The album presents two 20 minute tracks (Sounds of the Shadow and Sounds of the Sun), built from organ samples performed and recorded by Monty Adkins. On first listen this could be classified as drone music, but in fact a lot is happening in the layering of the organ sounds, and the pieces build up to a climax in a way that defies the strict definition of ‘drone’. (Not that this matters in any way, though)

“In the two parts of the work Adkins wanted to induce a sense of mediation, contemplation and reflection. He wanted the sound to be constantly, though in some instances imperceptibly, changing so that one remained mindful of the music rather than allowing it to drift in to the periphery of one’s consciousness. For Adkins, the focusing on a single organ timbre over an extended duration encourages a more attentive perception as the ear is drawn in to the micro-fluctuations within each of the extended phrases. One’s sense of time is dilated and there is a sense of envelopment within the soundworld.”

There’s no mention of what organ is used for the recordings, but there’s a strong association with the timbres of a church organ. Which would be appropriate, because these pieces were created for a multimedia exhibition at the Bradford Cathedral to interact with fourteen paintings by Andy Fullalove (as well as with the light from the stained glass windows in the Cathedral). An example of Fullalove’s work can be seen on the album cover.

Listening to this music (with the acoustics of the large cathedral it was played in) while enjoying the interaction of the paintings with the ever changing light must’ve been a moving experience.  When listening to it in your private surroundings, the visual part is missing of course. But it’s still a moving experience anyway. 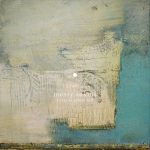 Monty Adkins‘ sixth solo album (since 2009, not counting the earlier releases as Mathew Adkins) is somewhat different from most of his earlier works. It is as quiet and introspective and is created with the same thoughtful sound design, but it feels a bit like it is a selection from two different albums. One part featuring ‘modern classical’ piano compositions, performed by Jonathan Best, the alternating tracks presenting the twinkling electronic soundscapes  (here created using celesta, organ and electronics) we came to know Adkins’ previous albums: the “slow shifting organic textures derived from processed instrumental sounds.”

At first listen, it seems as if you’re listening to two different albums in a random sequence. But listen carefully and you’ll start to hear the details that connect the tracks: subtle acousmatic backgrounds coloring the piano compositions, or soft piano notes enhancing the charismatic electronic textures.

A Year At Usher’s Hill  is the third part of a trilogy, together with Rift Patterns and Residual Forms. Three albums that, according to Adkins, are based on “psychogeography and psychosonology”.
“The album is highly autobiographical, charting events, places, and most importantly the people associated with these experiences… a re-discovery of memories and the connections between them across time.”

Like all Eilean Records releases, the album refers to a map point – a number between 0 and 100 pointing to a map of an imaginary land. This is map point 28. You won’t find Usher’s Hill anywhere except from this location of the Eilean map, or in your own imagination.
But you can be sure it is a very beautiful place to visit.

Note:
For those that can play piano and read scores: there are three scores available from Monty Adkins‘ website:  Shifting Ground, In Memoriam Jacques Hamel, Under A Lunar Sky.