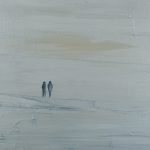 James Murray has regularly been featured this blog: recently with his album Eyes to the Height, and before that with The Sea in the Sky, Mount View and, of course, his work with Anne Garner on Be Life.
Each album building on his reputation of a sound wizard capable of linking the abstract to the accessible in a very unique and personal way.

Killing Ghosts, his latest, is released on the renowned Home Normal label. Label curator Ian Hawgood recognised Murray‘s talent to ‘blur the line between deep electronics and textured ambience. […] The combination of melody and careful design [that] takes a huge amount of skill, care, and patience.’
The label is obviously extremely proud to present this album. Given the reputation of Home Normal for their past releases, that is about the best recommendation you can possibly get.
And one that I can wholeheartedly support!

Compared to earlier works, where his compositions sometimes felt like they were ambient instrumentations of vocal pieces (and sometimes they also were), James Murray takes a step further into creating abstract soundscapes. Killing Ghost is darker than its predecessors in this way. It’s different compared to earlier albums, in a way. But not thát different because it has all the great marks that we have come to know by now: personal, emotional, and with unequalled sound design.

The beautiful artwork from this album is painted by Małgorzata Łapsa-Malawska, whose motto is ‘simplicity is the ultimate sophistication’. (Which can be shortened to ‘Less is More’). 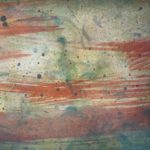 Not even a year has passed since Samuel van Dijk (Multicast Dynamics) completed his four-part series Scape, Aquatic System, Scandinavia, and Outer Envelopes. Finland must be an inspiring country to live in!
His new album, Continental Ruins, sounds like it could have been part of the quadrilogy: Van Dijk continues his sonic observations uninterrupted. But the concept, the story behind this album is slightly different: it is “inspired by decayed infrastructure – a sound documentary about sunken cities and continents, landslides and islands.”

‘Arctic’, ‘gloomy’, ‘submerged’, ‘desolate’ may be the key words to describe the musical palette created with “analogue synthesizers, arcane effect and manipulated field-recordings”, but at the same time the beauty of decay is attractive in a strange way. And very calm and organic, too. Probably because it bears the promise that new things, new life, will always grow from the ruins. 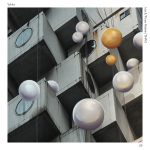 With three tracks (23 minutes), this (download-only) EP by Norwegian duo Pjusk (Jostein Dahl Gjelsvik and Rune Sagevik) will probably leave you hoping there’ll be more of this in the future.
Their last album (Drowning In The Sky, with Sleep Orchestra) was from 2014. Since then their output was limited to short 3-track EP’s, like this one. But does it matter? Three EP’s make up a full album, don’t they?

Syklus is a “celebration of friendship”: each track is a collaboration of the duo with a different artist, coming from every corner of the world: Canada (Loscil), Kurdistan (Porya Hatami) and China (SHAO).
Each of these artists has their own influence on the tracks, but the mini-album still manages to retain the consistent sound that we have come to know (and love) from previous Pjusk albums.