You probably know there’s a category here called ‘other music‘ which is used for music that is not ‘strictly ambient’ but somehow fits into the scope of this blog. But still I sometimes feel the need to recommend an album that is way outside the ‘ambientblog scope’, and so doesn’t really belong here. But on the other hand … why not step out of the ambient box every once in a while? 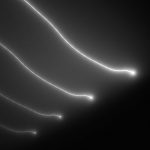 It’s easy to hear why Elektro Guzzi ‘doesn’t belong here’: this is energetic club music with a thriving beat. Drums, bass and electric guitar basically, pumping irresistible rhythms. Especially in the opening and closing track Element (Bone Version) and Schmone – with the somewhat more ‘jazzy’ tracks Speck and Parade in between.
No way I would call this music  ‘ambient music’.

But if you listen closely, there ís a link: in the Basic-Channel-dub style mixing of Speck , the warm vibes, and especially in the additional use of the trombone section featuring Martin Ptak, Daniel Riegler and Hilary Jeffery.
(You may remember Hilary Jeffery for his tromboscillator experiments and his work for the Kilimanjaro DarkJazz Ensemble (among many other projects he was involved in).

“With implementing trombones as extra oscillators, dissociating them from their conventional use, the trombones become part of the human-machine-universe and are used as an additional soud source in order to modulate and explore its variety live on the stage.”

Elektro Guzzi  is an Austrian guitar-bass-drum trio performing ‘techno’ music in a live setting, without using any prerecorded material, loops or computer: basically with only drums, bass and electric guitar. For this release, they enhanced their sound with the addition of (three!) trombones – an instrument which basically cannot be faithfully reproduced electronically.
I’d really love to see them perform live!

Parade is a 4-track EP with work that was commissioned for the Artacts Festival for Jazz and Improvised Music.
The 32 minute mini-album leaves you wanting more. No doubt there wíll be more – and there’s always the back catalogue to check out.
But for now, this one goes on repeat!