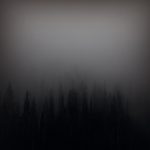 UNLAND – DIE RUHE NACH DEM STORM
The quiet before the storm can be frightening, because you don’t know what’s to come. The quiet áfter the storm can be reassuring – depending on the fierceness of the storm – because you know the storm has passed.
Unland is a german trio consisting of Jonas Meyer (piano, effects), Christian Grothe (guitar, effects, sampler) and Shabnam Parvesh (clarinet). They create “improvised soundscapes between conventional composition and digital abstraction”.   Not too digital, since their core instruments are acoustic, and their sound is, too, although the instruments are manipulated in real-time.
This relatively short album (29 minutes) demonstrates their sound, which “defies any definition and is influenced by jazz, classical music, kraut-rock and ambient-meditations.” 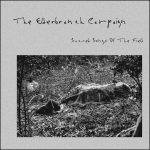 THE ELDERBRANCH CAMPAIGN – SACRED SONGS OF THE FIELD
I must admit that I had not heard of The Elderbranch Campaign before, but it turns out this duo (G.M. Slater and Stephen Robert Rook Thompson) have already released quite a few titles since 2012: Sacred Songs of the Field is their 11th album.
It’s an homage to other albums dedicated to animals, such as The Residents’ “Animal Lover” and Pink Floyd‘s “Animals”.  It contains three long tracks that, in their own words ‘showcase their interpretation of how animals (in this case sheep, pigs and dogs) would express themselves musically’.
That was not exactly what I thought of when listening to The Lamentations of Sheep, The Sacrifice of Pigs and The Passion of Dogs, but it’s an interesting thought anyway. Not the happiest animals, apparently, because these dark ambient soundscapes are quite haunting and hardly leave room for light to enter.
But they are a fascinating set of sculptures created from synths, guitars, found objects, voices and processed field recordings.
‘Absolutely best experiences over headphones’. 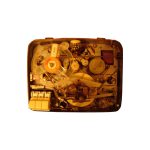 WOUTER VAN VELDHOVEN – A HEAD STUCK IN TAPES
This is simply presented as a collection of unreleased works. The reason why they remained unreleased, even when there were enough labels interested in releasing his work, is Wouter Van Veldhoven‘s personal insecurity about the musical results:
“[I] have often delayed releases to a point where I didn’t want to release the material at all anymore. For now I am not going to release anything until I might accidentally might create something I would really like to release.”

His insecurity may be somewhat understandable if you’re familiar with his audio-visual performances, the complex contraptions of his reel-to-reel tape recorder performances. There is as much to see as there is to hear – there is definitely much more going on than “just” audio. But still, I think he underestimates the power of his music!
The proof of that is in this collection of almost 2 hours of unreleased material, which demonstrates Van Veldhoven’s unique (deteriorated) sound created by interplaying vintage (and often worn-out) tape-recorders.
Because he considers this as ‘unfinished’ music, not intended for official releases, this collection is presented as a Free/Name Your Price download!