Thomas Köner is perhaps the Jules Verne of ambient-electronic soundscapes: his sounds seem to come from the deepest ocean, the centre of the earth, the vastest spaces imaginable. If you know his work, you will often immediately recognise his sound when you hear it – and maybe feel it before you even hear it.

Knowing his back-catalogue, the choice of a piano as the main instrument for his new album is somewhat surprising. Piano notes are clearly fixed in time, as opposed to the stretched sounds Thomas Köner usually applies. It is, in a way, a bit of a “rigid instrument”.

Köner’s music is often referred to as ‘arctic’. The bright clear white cover of “Tiento de las Nieves“ (“Snow-Tiento”) refers to a bright, untouched, white space, as much as to endless plains of snow.

A Tiento is a free-form keyboard music originating in Spain in the 15th and 16th century. It is “formally extraordinarily diverse, more a set of guidelines than a rigid structural model such as fugue or rondo. Nearly all tientos are imitative to some degree, though not as complex or developed as the fugue.”

At first (and somewhat inattentive) listen, with a headphone while commuting, this 68-minute piece surprised me. Had I not known this was Köner’s new album, I’d have guessed this was a new generative music piece by Brian Eno.
But the Tiento revealed its true nature when played at home, using a decent sound system: no-one can make a piano sound like Köner can! What a sub-level low suddenly appeared!
The piano chords – played by Ivana Neimarevic –  seem randomly placed (hence the reference to Eno’s generative music); the piece stays completely unhurried, even when the piano increasingly interacts with the electronic ‘coloring’ of the background.

“For Thomas Köner the musical score of any of his pieces is a priori meaningless, and receives meaning only by placing the notes and sounds at particular points in time in a way which is forced upon them by their inner logic.
Like atoms in a particular molecule, these notes ought to have a specific distance and order dictated by certain laws, they might have to occur repeatedly, in order for the musical piece to be physically stable and complete, and thus to be able to exist continuously.”

“Tiento de las Nieves“ is an album to put on repeat. It will play a long time and without getting boring. 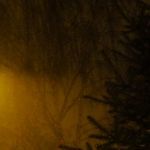 Barely a month before the release of “Tiento de las Nieves”, Touch released a (WAV-only) download performance by Thomas Köner and Jana Winderen.

The resulting piece is completely absorbing: it must’ve been quite an impressive experience to attend this performance at the square garden between the cathedral and the bishop’s palace.

“That night of June 2014 in Evreux, Normandy, they fashioned together a very discreet and evolutionary soundscape, which included mist, birds, slow – very slow – breathing, celestial humming, rain… all of which integrate a panorama their common music designs, which is not necessarily cold.”

No physical release, unfortunately, which may be a pain for some collectors. But still we should thank Touch for distributing a recording that otherwise would’ve probalby remained unavailable.