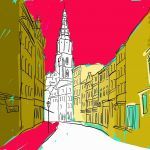 Creating music based on well-known originals is not without risk, especially when the original is a part of our ‘collective memory’.

It is even riskier to create a full album based on a single composition, one that almost everyone will immediately recognise: Erik Satie’s “Gymnopédies No.1″.

Bionulor (Sebastian Banaszczyk) creates his music “without any instruments (whether real or virtual), solely on the basis of processing one short fragment of a previously recorded sound material”).

“Erik“ is his third album created using “100% sound recycling” (after the 2009 debut, based on Music from the Middle Ages and Renaissance, and “Sacred Mushroom Chant” (2011), using the human voice).

Fundamentally, this is an electronic music album – which means the result is quite uncomparable to the quiet and peaceful original piano composition.

Like shifting a microscope to focus on a slightly different detail, Gymnopédie No. 1 is carefully dissected to the smallest detail. It’s almost like if this composition is fractal in nature: no matter how many times you zoom in, the original structure seems to remain intact. The Satie-esque atmosphere remains felt through most of the the cut-up chords.

This cut-up clicks & cuts electronic versions of a well-known classic may shock some purist, I assume.
But in his time, Erik Satie himself was not afraid to stretch some borders and ignore the rules of ‘tradition’.

One wonders what Satie himself would think of these recycled versions of his work. I think he’d have liked the idea.