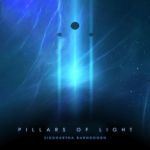 “Pillars of Light” is Siddhartha Barnhoorn‘s first full album, but it can hardly be called a ‘debut’.

Although relatively young (born 1981 in Katwijk aan Zee, Holland), he has produced numerous film scores since 2004. Producing over 50 film scores in the last five years (!), not counting documentaries, trailers, commercials and other project, he obviously is not afraid of working hard too!

As a fan of atmospheric ambient music (which is not a strange thing when you’re a contextual composer), he decided to create his own independent album: “Pillars of Light“

Though they work very well without any visual context, the tracks on “Pillars of Light” could have been compiled from earlier soundtrack works: they have a very strong cinematographic feeling, especially in the first two tracks, ‘Foundation’ (with threating bass-drum rhythms, a screaming guitar track mixed deep in the background) and ‘Artifacts’  (dark atmosphere, ethnic musical influences and a startling climax halfway).

From the listener’s point of view, there’s a very thin line between contextual music (movie or game soundtracks) or music purely for listening without any added visual dimension.

Judging from the first two tracks, this album would not exactly qualify as ‘ambient music’ when ‘ignorable’ is part of your definition of what ambient music is..
But from there, the album slows down significantly and the sounds get somewhat more diffuse, somewhat more abstract and also lighter in tone. ‘Nebulae’  is ‘classic’ ambient with organic sounds reminiscing of early Brian Eno.

Barnhoorn is not aiming for the endless emptiness of stretched drones, but for ‘a collection of dark as well as light tracks, sounding organically and creating a complete experience together’.

And when the closing title track of this album comes to an end, he definitely succeeded in that.