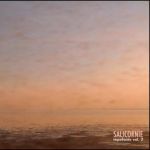 Most ambient music deals with more or less imaginary landscapes -like, for example, the two compilations recently reviewed: “Hidden Landscapes” and “Underwater Noises“.

This is definitely not the case for both Topofonie albums by Enrico Coniglio (who also contributed to the Underwater Noises compilation), that are inspired by Venice and its lagoon.

“A polymorphic portrait of what Venice is today, one moment decadent and melancholy, then romantic, rowdy, colourful and chaotic. Postcard of a thousand postcards, photos of a thousand photos…”

“Enrico Coniglio (1975) is a musician with an interest in the aesthetic aspects of the landscape. Starting from his curiosity in experimenting within tonal variation of ambient and atmosphere music, with a particular referral to the soundscape of the Venetian lagoon, his music aims at investigating the loss of identity of places and the uncertainty on the evolution of the territory.”

Triggered by his track on “Underwater Noises“, I noticed some of the artists Coniglio has worked with. An impressive list, with names like Joachim Roedelius, Emanuele Erante, Oophoi, Janek Schaefer and Arve Henriksen.

Arve Henriksen‘s heart-melting trumpet marks the opening title track of the album, quietly introducing the rhythm pattern sampled from Ravel‘s Bolero. Using this emphatic rhythm on an album that can (partially) be classified as an ‘ambient’ album is of course a remarkable statement in itself.

Apart from ‘ambient’ music, this album also includes ‘jazz’ music (‘Usaghi Blues‘), and quite a lot of ‘environmental’ recordings (‘Angels of San Marco’ ). Some of the tracks, like“The Girl from Murania” would do very well in a movie soundtrack (*).

Like the city it is dedicated to, Salicornie is definitely worth multiple visits.

By the way: of course it’s best to check it out together with its 2007 predecessor “Areavirus – Topofonie Vol.1”

Enrico Coniglio – The Girl from Murania

(*) – for those looking for trivia details: I may be wrong but I seem to recognise the saddening girls’ sniff in this track from the sample that is also used in some tracks on Kreng’s L’Autopsie Phénomenale de Dieu, and maybe also in Julien Mier’s Breathe with Me.
Can anyone confirm this? And, if so, what exactly is this sample used?