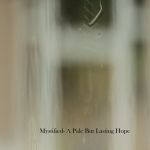 His discography is quite impressive (nine separate pages on Discogs!), and although his music is mostly categorized as atmospheric ambient/drone music, you’ll also find more industrial sounds and noise among these titles.

“A Pale But Lasting Hope” is one of Mystified’s latest releases. A diverse 5-track album mastered by the renowned Robert Rich.

Rich’ influence can be clearly heard in the clear sound quality and some of the sound details, such as the water drop accents in Over the Nest and the low drum sounds in Technicolor Time Sink.
Still, this is a Mystified album in every single minute.

It is a diverse collection of sounds. The album starts with strange, high-pitched gliding (string?) sounds, and ends with the 21 minute-long Technicolor Time Sink,  which is noisey and calm at the same time.
Inbetween, there is the ambient calm of Over the Nest and two versions of the intense industrial rhythm patterns of Loop Redux.

Unlike some of the other long-form ambient drones Mysitified has released before, this is not exactly your average late-night relaxed drone listening experience. It’s an active, roaring collection of fascinating soundscapes.

“A Pale But Lasting Hope” is originally released via Magnatune, but can also be downloaded from iTunes and eMusic.