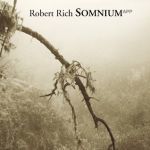 Robert Rich originally released Somnium in 2001 on DVD-Audio. The DVD format was dictated by the length of the three-part piece: it clocks in over 7 (SEVEN!) hours.

Apart from his vast catalogue of ambient music, Rich also is known for his unique Sleep Concerts in the 1980’s. Somnium was a logical follow up to these concerts: it was designed to guide you through a good night’s sleep.

Starting relatively ‘active’, then dozing off slowly into undisturbed deep sleep, before slowly becoming more lighter and ‘active’ again, Somnia could be the best medicine for anyone suffering insomnia.
(And that’s a big compliment in this context!).
But even when you’re not sleeping to it, it’s a pleasurable listen – although probably only few would sit out the entire album listening actively.

Somnium has become a landmark monument of ambient drone music. Not only conceptually, but also because of the endless calm and beauty of the musical environment.

Almost 10 years after its initial release, this project return in the (revolutionary?) form of an App Album. Designed to run endlessly on your iPhone/iPod, it can play uninterrupted for much longer than the original seven hours. It will simply run until you stop it, or until your iPhone/iPod batteries run out.

As an App, the Somnium App is extremely ‘bare-bone’. It was designed to liisten,  not to watch.
In fact, there’s only one page with the cover art, a slider (from ‘slow’ to ‘slower’) and a start button. After hitting Start and setting the volume, you’re supposed to turn the device screen off and just listen…no need for any further visual distraction.

For the Somnium App version, Robert Rich has selected and isolated different passages which are sequenced randomly. This approach means that the music remains interesting enough to actively listen to when in ‘slow’ mode. When set to ‘slower’, there are less changes so the pace suits sleeping.

This also means a bit of a conceptual distraction from the original DVD, which followed the sleep cycle (relatively active, to deep sleep, to relatively active again before waking up).
The app version randomly cycles  through various parts of the composition, so it does not exactly follow that ‘cycle’. In the ‘slow’ (most active’) setting, the music is indeed constantly changing, and stays interesting enough for active listening for a long time.

Due to its original concept, the Somnium DVD is an essential purchase for anyone interested in Drone Ambient Music. But with the Somnium App , Robert Rich defines a complete new way to present music: the App Album.
And: consider the price for this immersive beauty (EUR 0.79; USD 0.99; GBP 0.59) and compare that to the price of a CD!

Endlessly running ambient soundscapes to enhance your personal environment.
If you are a iPod/iPhone owner and enjoy ambient drone music, I guess you should not hesitate to check this out.

Robert Rich – Somnium (excerpt)
(This sample is taken from the original Somnium DVD, about six hours from the start of the composition)
[total: 1,201 - today: 1]