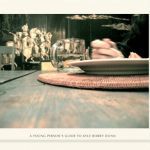 When it comes to ‘classical droning’, Stars of the Lid are the reference point. While there’s some debate whether their music is Brilliant or Boring, they simply prove good music can be both.

Comparisions always are a bit risky – as music deserves to be judged by itself, not by comparision.
To me, ‘A Young Person’s Guide to Kyle Bobby Dunn‘, the new double CD by the Canadian composer Kyle Bobby Dunn (now residing in New York), has the same touching quality as most of Stars of the Lid’s music, that’s why I had to mention them.

There’s twelve tracks on this double album, with an average length of just under ten minutes each.
Though the album is quite diverse in sound and themes, it’s also very coherent in style: all tracks are drone-based and slowly evolving (with some exception of Last Minute Jest and Sets of Four, which are Satie-esque piano pieces).

This music would be classified as electronic music by it’s nature, but most of it is not: it’s ‘ensemble music’, created with acoustic instruments.

The sleeve mentions some of the contributors, obviously some of them are classically trained musicians, but there’s no information about their role or their instruments.  Though the sounds are quite heavily processed, using these sound sources results in emotionally appealing music sounding different from most synth- (or guitar-)based drone music.

‘A Young Person’s Guide to Kyle Bobby Dunn‘ has no weak moment.
It is relaxing, non-intrusive, but compelling enough to keep you interested for the full two cd’s length.

Though still in his early twenties, composer Kyle Bobby Dunn definitely masters the genre. Check it out, if you like the music of Stars of the Lid or Celer.