The Chronicles of Spellborn‘s musical soundtrack was created by Jesper Kyd, while the ambient/environmental sounds were created by dutch ambient music artist Matthew Florianz.

“Whereas Time is the leading element in movies, it’s Location in games. That’s why these media are so fundamentally different. Sound design in games means creating landscapes, surroundings, atmospheres and the movement within it. In games, the player decides where to move next, thus creating their own mix” (Florianz)

Unfortunately, after it’s release, Spellborn ‘slipped through the cracks’, as it did not get the attention it deserved, in spite of critical acclaim. It is now under redevelopment, and while it is, the current version is available to download and play for free.

This mix is intended for gamers ánd non-gamers to listen to the music without the game context. I’ve chosen parts and samples from the soundtrack (which is over 20 hours of immersive sounds!) without relation to the gameplay and story development.

I don’t know what the future may bring regarding this online game, but The Chronicles of Spellborn deserves to be remembered for its great soundtrack!

This mix was created in february 2009. 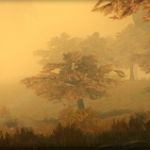