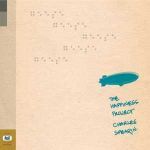 It’s not ambient, and it’s only remotely electronic.
Still, when I discovered this album last week (it was released in march this year), it left me completely speechless and utterly fascinated.

The Happiness Project is a concept created by Charles Spearin from Toronto, known by some for his contributions to Do Make Say Think and Broken Social Scene.

For this project he has been interviewing some of his neighbours in downtown Toronto, and used their recorded voice to create the musical track.
In these sample-laden times that in itself  does not sound very spectacular, but Spearin focussed on the melody of the voice and doubled it with a musical instrument fitting the voice. The pitch of the voice is never changed, but rhythmic and melodic patterns are created by repeating some of the phrases. Thus resulting in a sparkling and engaging kind of experimental jazz music.

From the first track, where Mrs Morris’ talk about how just greeting her neighbours ensures happiness sounds like a Coltrane Jazz-solo, I was perplexed by the effect Spearin achieves this way.
Even a child nagging for straight butter (Ondine) becomes an interesting song to listen to when her sulk is transposed to a violin solo.
‘Marisa’ gets stuck in her answer and thinks she blew the project that way (‘Send me home!’), but the harp melody accompanying her is unbelievably complex yet still listenable.

Every neighbour gets his/her own musical style. There’s the deeply emotional story of Vanessa, who was born completely deaf. She tell how a cochlear implant changed her life, and the music empathically illustrates how she felt when she could start hearing sounds.
On the other hand, there’s Mr. Gowrie, telling about his family of 14 children living in a small house. His story gets a different musical background, fitting the tone of his voice and his story. And the young Vittoria, who can’t find the right words and gets stuck in ‘it’s like, ehm,..it’s like ..ehh’ frases receives an exuberant big-band treatment exactly phrasing her hesitations.

I don’t think the melody of human speech has ever been articulated musically in a way as moving as this.

Beauty can obviously be found by just looking around – and listening to your neighbours.
So – there’s no better way to conclude 2009 and start 2010 with a message like that.

Who’d have ever guessed that my favourite album of 2009 would NOT be an ambient/electronic album?
Not me – but is is, definitely!!