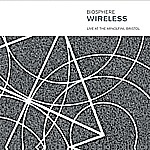 There are not too may live-recordings in ambient music. With obvious reason: most of it is recorded in (home) studios and is optimized for use in private spaces and/or exhibition rooms.
The noisy live club environment is not the best place to consume ambient music.
Apart from that, ambient gigs and laptop concerts are not noted for their intense live experience. At most gigs, the performing musician might as well be checking his mail after starting the pre-recorded sequence.…the public wouldn’t really notice.

I remember watching a Biosphere live gig in Amsterdam Paradiso, way back in 2002.
Paradiso, like any club in Holland, is noted for it’s noisy crowd, chatting and twittering all through the concert. That’s the effect of having a bar INSIDE the concert hall (and of people coming to a Festival instead of devotees coming to a single concert).

Geir ‘Biosphere’ Jenssen  was confident enough to react in the same way teachers do in noisy classrooms: he turned DOWN the volume instead of cranking it up. At some parts the sound of the crowd was even louder than the music itself.
This annoyed me at first, but soon I realised that that was the spirit of ambient music: just incorporate the sound of the environment instead of trying to eliminate it.
At that point, the sound of the crowd became part of the gig and made it unique.

The new Biosphere release on Touch, ‘Wireless (Live at the Arnolfini, Bristol)’ is a live recording. It was recorded on the occasion of the Touch 25 Live concerts in 2007.
Don’t be afraid: there’s no audience sound to be heard on this recording. The sound is deeply organic, which can probably be credited to Chris Watson mixing the desk recording with his own Nagra P11 Flash card recorder (and of course to BJ Nilsen mixing, editing and mastering).

‘Wireless’ could be listened to as a sort of ‘Best of Biosphere’. There are tracks from various titles (Shenzou, Dropsonde, Substrata), and they get their new dynamic being carefully blended like this.
There’s also some new work, like the trombone performances by Anders Karlskås in the opening and closing track, Pneuma I and II.

As with all live recordings the additional value compared to the original releases may be questioned. But this recording proves that in some special cases ambient music also “works” very well in a live setting.

Geir Biosphere Jenssen once again proves he’s one of the few Great Masters of the genre.