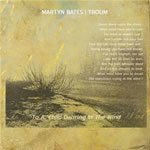 Very often the vocal parts lean heavily on (english) folk tradition. Which should come as no surprise, because the drone was extensively used in early folk music instruments.

On thís particular project Martyn Bates (singer in Eyeless in Gaza in the 80’s), teams up with german ”Transcendental Drone-Muzak” duo called Troum. The lyrics are W.B. Yeats poems, and the result of this combination is chilling.
This release may prove to be a landmark in ambient history: the ambient genre definitely has found its way into a new territory.