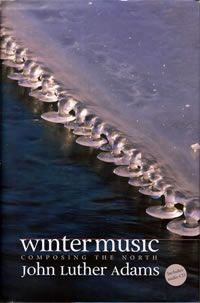 Although I am not yet quite sure about what I think of John Luther Adam’s music, I found this book a pleasure to read.

“They say that she heard things.
At Naalagiagvik, The Place Where You Go To Listen, she would sit alone in stillness. The wind across the tundra and the little waves lapping on the shore told her secrets. Birds passing overhead spoke to her in strange tongues.
She listened. And she heard. But she rarely spoke of these things. She did not question them. This is the way for one who listens.”

To illustrate the music he writes about (his own), there’s an accompanying cd with three long tracks.
“Winter Music” was published in 2004 by Wesleyan University Press, ISBN 0-8195-6742-6.