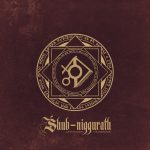 Maybe the Cryo Chamber label is to dark ambient music what H.P. Lovecraft was for the horror fiction genre. The label honours the original master with a series of albums each dedicated to a dark Lovecraft deity.

“The Black Goat of the Woods with a Thousand Young” is a ‘perverse fertility deity’:

“An enormous mass which extrudes black tentacles, slime-dripping mouths, and short, writhing goat legs. Small creatures are continually spat forth by the monstrosity, which are either consumed into the miasmatic form or escape to some monstrous life elsewhere.
Of all the mythos deities, Shub-Niggurath is probably the most extensively worshipped.”

As expected,  the music is as dark as these woods supposedly are. The 2CD album features two hour-long tracks: a continuous mix of a roster of artists associated with Cryo Chamber: Atrium Carceri, Dronny Darko, ProtoU, Northumbria, Randal Collier-Ford, Council of Nine, Alphaxone, Ugasanie, and 12 more.
However, this is not a compilation album. Like the earlier releases, all these artists worked together – ‘linked their studios and sound for over a year – to complete this huge collaboration project.

“With the proper occult paraphernalia, Shub-Niggurath can be summoned to any woodlands at the time of the new moon.”

I recommend you to be careful in trying! Maybe just leave the proper occult paraphernalia where they belong and just enjoy this dark trip. On its own, or perhaps as a background soundtrack for reading in Lovecraft’s Cthulthu Mythos.

Peter Edwards Ambient is a sound designer living in the desert wastelands of New Mexico, USA. I don’t know why the Ambient is consistently added to his name, probably to distinguish him from many others with the same name, or to indicate that he can make other music than ambient too… but anyway it leaves no doubt about what kind of music to expect.
In this particular case: “Ambient music for time travellers”.

Temporal.Divergence “is a science-fiction-inspired dark ambient music journey designed to immerse the listener in a continually evolving back story of time travel and humanity’s struggle against the darker powers of Artificial Intelligence.”

The ‘widescreen’ production and immersive pads do a fine job in creating an outerspace/Sci-Fi atmosphere. This cinematic approach is even enhanced with the narration on Gravfield.Theory (spoken by Randy Savage) and The Quantum Mechanics Of Time Travel Through Post-Selected Teleportation (! – spoken by Seth Lloyd, MIT-Quantum Mechanic).

An exciting hour-long trip out of time, into the dark and unknown outer space.

Alessandro Ciccarelli is a trumpet player with an academic background – but you’ll have a hard time locating a trumpet sound on his first solo album. Of course I do not really know what the actual sound sources were for the samples he used, so there may be a trumpet involved after all, but the result is strictly electronic. (*) And rather deep.

These pieces reflect on the idea of composer Giacinto Scelsi:
“Music cannot exist without sound. Sound exists by itself without music. Music evolves over time. The sound is timeless. It’s the sound that matters. Sound is strength.”

The background notes on the six compositions are rather academic: the first three tracks, recorded live, are all based on subtractive synthesis, resulting in ‘a magmatic sound, a minimal and stratified drone”. The next piece (PRW7~) is based on additive synthesis, facing us with ‘a dialogic process between sound programming that executes instructions according to Gaussian distributions for some parameters, and the musician who intervenes in real-time, following his ear, on parameters related to the effects.’
Are you still with me here?

The academic background of the creation of this music may be interesting to everyone that is creating electronic music him- or herself. But the most important thing is that you can just leave this as it is, and immerse yourself in these fascinating,  ‘almost biological’ sounds.

(*) – edit:
Allessandro explains:
“Since you were wondering about the sound sources, I tell you: no trumpet here. First 4 tracks are composed and programmed with Pure Data software, so generative sounds (synthesis). Last two tracks mix field recordings and generative sounds (Pure Data) in Ableton Live!”