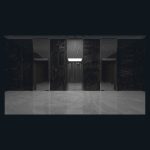 CLARICE JENSEN – FOR THIS FROM THAT WILL BE FILLED

Clarice Jensen is not the first and certainly not the only person that “expands and confuses the familiar sound of solo cello through the use of effect pedals, multi-tracking, and tape loops recorded at variable speed”. But when the artistic director of the  American Contemporary Music Ensemble (ACME) releases her debut album on the Miasmah label, extra attention is required. Especially when that album opens with a piece composed in collaboration with Jóhann Jóhannsson, with whom she collaborated and toured from 2009 until his death in 2018.

Her music is not about displaying virtuosity, but about restraint – “to fill the void with what [the listeners] find in their center of stillness” – which of course is a different kind of virtuosity in itself.

bc (the track composed with Jóhansson) is a relatively ‘simple’ piece displaying “the startling effect subtle changes have on conventional elements across many repetitions, employing the simple devices of a two-octave c-major scale and a three-chord loop.” It is followed by Cello Constellations, written for Jensen by Michael Harrison, scored for solo cello and 25 multi-tracked cellos and sine tones.

The second half of the album contains the two-part title track For This From That Will Be Filled, composed by Clarice Jensen herself, soliciting ‘both meditation and disorientation’ in using drones, long loops and the sounds of New York’s Grand Central Terminal accompanying the processed cello.


The music on this album is originally written for an audio-visual live performance with Jonathan Turner, stills of which are included in the album artwork. Excerpts of Jonathan Turner‘s videos for these performances can be found on his VIMEO page. 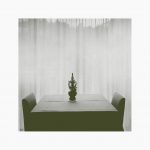 It starts with a knock. A kind of ‘Poltergeist’ knock, with increasing reverb. Immediately the atmosphere is as eerie as the track title “Neither Flesh Nor Fleshless”. From there, ‘the music swells and breaths’ , with ‘atmospheric layers of strings, percussion and horns’.
It is the striking start of At The Still Point Of The Turning World, the album that got its title from T.S. Eliot’s poem Burnt Norton. The opening track seamlessly flows into Perpetual Possibility, which introduces the dialogue between piano and electronics. the atmosphere slightly changes but won’t loosen its grip on the listener.

“It is a record of restless motion, lilting and pulsing with a sense of gentle determination. Born out of a period of mutual loss, the works carry a bittersweet sentiment. Bitter in the
sense of loss; sweet in the sense of lingering memory and influences recognised of those departed.”

Joana Gama, Portuguese classically trained pianist and researcher, and Luís Fernandes,  electronic music artist also known as Astroboy, met in 2012, and have released work as Quest in 2014. They have also made the soundtracks for a number of prize-winning short films. At The Still Point Of The Turning World was commissioned for the Westway Lab Festival 2017.

Exploring “the timbral connections between piano and electronics”, combined with José Alberto Gomes’ orchestral arrangements performed by Orquestra de Guimarães, results in a captivating spectrum of contemporary classical music. Or New Music. Or Post-classical electronics.
Oh well, words seem to fail me here.
Never mind, just listen to the way the atmosphere slowly evolves from the eerie opening chords to the completely different atmosphere of Lucid Stillness and Shaft Of Sunlight.
You’ll be amazed. 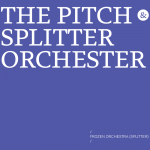 Drones are often performed by single or just a few instruments, electronic or acoustic. It’s not often a drone piece is performed by a full orchestra (unless, perhaps in the moments before a performance starts, when the orchestra tunes their instruments).
The Pitch quartet teams up with the 19-person Splitter Orchestra to perform the 60 minute Frozen Orchestra (Splitter) on a variety of acoustic instruments combined with electronics, turntables, oscillators and reel to reel tape machines. 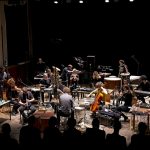 The title for this piece could hardly have been chosen better. The frozen piece feels like the musical equivalent of a movie still. But this does nót mean that nothing changes for 60 minutes, it changes in the same way the the ice caps on the earth’s North and Sound pole change: slowly. Very slowly.
” ‘Frozen’ indicates a very slowly moving field of harmonic relationships consisting of so-called pitch sets, which are augmented by noise sets, that is, nonperiodic sounds organized in equivalent relationships. The score guides the group through various defined states of frozen surfaces where each player makes individual choices from a set of intervals or noises and thus constantly shifts harmonic weight and textural quality.”

A performance like this may not be to everyone’s liking. But once you’re in the right – frozen – state of mind the effect is incredible. When the music stops, it’s hard to tell if it lasted 60 seconds, 60 minutes or maybe even 60 years.