After “Fragile.Flicker.Fragment” (2011), “Four Shibusa” (2012) and “Rift Patterns” (2014) (all of which I heartily recommend listening), “Borderlands” is Monty Adkins‘ fourth consecutive album on the Audiobulb label.
Before that, there were three earlier releases  – on Crónica, Radio France and Empreïntes Digitales  (as Mathew Adkins on the latter).
And from his website discography we learn that another digital release is to be released in March this year!

Quite an impressive catalogue that is, especially given the exceptional quality of all these recordings. Each has its own style, instrumentation and context and yet all have the distinctive ‘Monty Adkins sound’ – music “characterized by slowly shifting organic instrumental and concrete soundscapes”.
An unparallelled match between electronic and acoustic sounds, between the ‘natural’ and the ‘synthetic’.

“Borderlands” presents a single 37 minute piece, commisioned for “Totum One“: a 360° audio visual laboratory installation, “exploring virtual worlds using 3D headsets and new ways of hearing sounds.”  The installation is based on a text by Deborah Templeton “that explored liminal states of consciousness”, but this text is not present in this instrumental recording. 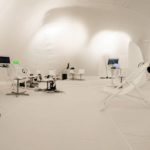 The sound that visitors experienced at the installation will probably have been quite different from what you hear here, because  visitors had “tablet computers so that they could send a graphical satellite on a journey between 3-D “planets”, each of which emitted a soundscape – for example, the sound of streams and running water.”
These added sounds and effects are not included in the basic recording presented on this album.

While the music of “Borderlands” was created to embark on a sonic space trip, the music has absolutely nothing to do with the usual kind of space music associated!
The heart of the piece is the sensuous multitracked cello playing by William Mace, subtly supported by unobtrusive electronic details and accents that slowly move (somewhat) to the foreground while the piece evolves.

The composition ‘comprises of six interludes and six extended panels, each comprising twenty-eight short melodic fragments. Each panel uses the same fragments to form new melodies and harmonies.” – but for the listener it feels – and can be enjoyed – as one single uninterrupted piece.
A piece in which every single detail has its place, a piece that conveys that everything is as it should be.
A very, very comforting piece.