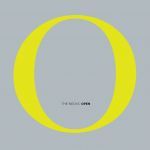 The ambient tree has many branches. In fact it’s hard to pinpoint exactly what “ambient” music is. This has raised many discussions, as the music called ‘ambient’ ranges from strict and almost unchanging drones to techno beats one can even dance to.

Knowing that this is the seventeenth (!) album from this Australian cult jazz trio (featuring Chris Abrahams, piano/keyboards, Tony Buck, drums/percussion and Lloyd Swanton, bass), whose music is often described as ‘lengthy pieces which slowly unravel in the most mesmerizing fashion’, I should have been prepared for something like this. But I wasn’t.
“Open“ hit me as something I had never experienced before.

The single 68 minute track opens with a sitar-like drone chord, introducing slow piano improvisation over bright bell percussion. Just when you are totally accustomed to that immersive sound and atmosphere, the percussion takes over into one of the most radical drum solo’s I have ever heard. (‘Radical’ in the exact opposite meaning of what you might expect from the word: it takes a lot of courage to include a percussion solo as sparse as this and keep it going for minutes and minutes…)
Just when the album seems to stretch into a ‘no compromise’ minimalist approach, the piano improvisation themes are re-introduced and slowly start to build a climax half-way the album. From there, the trio takes a slow descend back to the original point of departure.

I guess the ‘jazz approach’ may not be to everybody’s liking. And with their wayward approach to achieve ‘a calm, immersive stillness’, they’re probably not to the liking of the average jazz music lover, too.

But what this trio creates here is nothing short of amazing.
And, hadn’t this been the trio’s seventeenth album, I’d also say “unheard”..

“Open“ is released on CD only because it’s too long for vinyl.
I have seen no mention of a digital download (yet).