Field recordings are often an important part of ‘ambient’ recordings. But there are many variations: from heavily processed, almost unrecognisable sounds to strictly natural representation – and everything inbetween.
Some impressive examples: 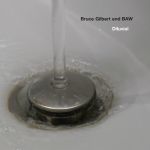 BRUCE GILBERT AND DAW – DILUVIAL(*)
(*) – Release date: sept 2 – link will be replaced when available
With the basic material including field recordings from beaches in Suffolk and London (recorded by Naomi Siderfin, half of Beaconsfield ArtWorks), “Diluvial” originates from “local preoccupation with rising sea levels – a work that dwells on the dynamics of flood geology and global warming; creation stories and climate change”.
The basic material may consist of field recording of natural sounds, but the synthesized sounds generated by Bruce Gilbert (founding member of art-punk band Wire and experimental music researcher since 2004) and David Crawforth (the other half of BAW) in response to those recording take it to a completely different electroacoustic level.

The result is a 74 minute soundscape, divided into seven tracks ‘alluding to the mythical seven days of creation”, guided by the track titles The Void, The Expanse, Dry Land, Lights, Creatures of Sea and Air, Beast of the Earth and Rest-Reflection – the latter being the only one featuring traces of rhythm.
“Diluvial” was originally created as a soundtrap performance in 2011, but we can consider ourself very lucky that the specialised Touch label has decided to release this album separately. Field recordings and the fear of a devastating flood due to sea levels rising faster than expected have never been recorded and interpreted more hauntingly than this! 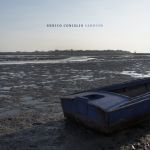 ENRICO CONIGLIO – SABBION
While on the subject of Water, this free download from the portuguese Green Field Recordings netlabel (focussing mainly on pure field recordings) should not go unnoticed. This relatively short work features recordings made in the Venice lagoon (Coniglio’s ‘natural habitat’), using binaural and hydrophonic microphones, but feels like a composition in three parts: “the first part consists in the recording of the propeller of a small boat moving toward St. Erasmo island; the second is the recording of a semi-submerged pipeline along the shore (same site, over and under the water) and the third is made in a shrubby area on the southeast embankment of the island.”
‘Sabbion’ is the name of the sandy bottom, homogeneous and consistent, typical of the surrounding areas at the inlets of the lagoon.

CHRIS WATSON – IN ST. CUTHBERT’S TIME
The Sounds of Lindisfarne and the Gospels
Currently, Chris Watson is the undisputed Master of Field Recording. His recordings are incredibly realistic and make you feel you are actually part of the environment you’re listening to. Yet they are seldom ‘just’ recordings: they are often cleverly re-arranged to create an actual composition of environmental sounds.
‘In St. Cuthbert’s Time‘s background is an interesting concept (which is explained in detail in the 24 page booklet): it’s an exploration of how the Lindisfarne island (two miles off the coast of Northumberland in North East England) could have sounded back in the 7th century (!).
At that time, “Eadfrith, the Bishop of Lindisfarne, was writing and illustrating the Lindisfarne Gospels. He would have been immersed in the sounds of Holy Island whilst he created this remarkable work.”
Watson re-creates a full year, every track representing a different season: Winter, Lencten, Sumor and Haerfest.
You might expect the sound of an 7th century island to be quiet and peaceful. It’s very well peaceful, but far from quiet! Eadfrith may possibly have had a hard time concentrating on this work in such a vibrant environment!

(Interesting aside: Chris Watson was a founding member of Cabaret Voltaire and The Hafler Trio, which seems to coincide with the presence of Bruce Gilbert mentioned above in this same post.) 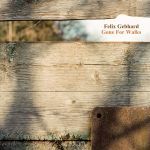 FELIX GEBHARD – GONE FOR WALKS
Berlin-based guitarist Felix Gebhard has a different approach to using environmental sounds. His recordings of the Wendland surroundings (a rural region near the Elbe River on the former East and West Germany border) provide the basic atmosphere for four ‘walks’ at different times of day (11:12AM, 04:15PM, 09:17Pm and 03:27AM) to which Gebhard adds improvised layers of instrumentation. The result is very peaceful – the opening track immediately sets the atmosphere with sounds reminiscent of Pink Floyd’s ‘Grantchester Meadows’ (from 1969’s ‘Ummagumma’).
The physical release (limited to 75) contains four postcards with images from the walks; while the digital version also includes some bonus items.
Perfect sounds for late warm summer nights!