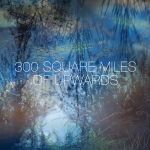 Shortly after the release of “The Eskdalemuir Harmonium”, Chris Dooks releases the second part of what will become a colourful Idioholism trilogy.

“300 Square Miles of Upwards” is released in a stunning package (designed by Rutger ‘Machinefabriek’ Zuydervelt): a bright blue vinyl 12″ album that also comes with an (extended) digital download version including a video version of the opener track ‘Gardening As Astonomy’.

The brightly coloured trilogy is not only interesting artistically and musically. It is is also the result of Dook’s personal battle against his chronic fatigue syndrome:
“Wherever medicine has abandoned its caring role, or simply has no available cure, sufferers of incurable chronic illnesses frequently turn to experimental and experiential strategies. Such strategies can seem an outlandish or surreal response to illness; for example, working closely with an abandoned and decrepit harmonium in the Scottish borders or forging Twitter-length statements about the universe may not be on the medical map, but to artists, these processes are a way of life. Within three main inter-reliant art projects, this autoethnographic experiment is not just occupational therapy for the afflicted, but a path of discovery by first-person experience.”

The preceding release was a poetic investigation of the sounds of a forgotten and somewhat deteriorated harmonium.
On“300 Square Miles of Upwards”, Dooks investigates the relation of astronomy with earthly phenomena:
“I read somewhere recently that one reason we know that the su’s solar energy peaks in 13 years ejections is because the trunks of felled trees have thicker bark around these periods”.

The tracks are created from vocal samples (most from Scotland, but also in Polish and Japanese) that are cut-up and looped and merged with the additional background of environmental field recordings, three pianos and a Korg Monotron. The way Dooks re-arranges the samples and builds an atmosphere with is almost visual, which should be no surprise regarding Chris’ experience in photography, film and TV.

With these selection of tracks, Dooks paints deeply emotional pictures that, at some moments, reminded me of the early (tape) works of Steve Reich or Gavin Bryars’ “Jesus’ Blood Never Failed Me Yet”.
Just listen to “Conversation with a Boy” (below) to hear what I mean.

Tracks featuring spoken word samples are different from instrumental ambient tracks in that they require a more dedicated, active listening – they can’t simply be played in the background and be ‘ignorable’.
But it’s rewarding to do so.
When you listen closely, your world will look different afterwards.

CHRIS DOOKS – CONVERSATION WITH A BOY