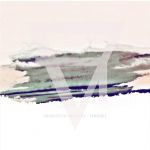 Transits of Mercury is a solo project of Mike Abercrombie (from Toronto, Ontario) – who is also half of ambient electronic duo North Atlantic Drift (together with Brad Deschamps).

“Vostok“ is a three-part project (2 parts are released now, part 3 will follow later this year), which is introduced with a modest “I’m not sure anyone has heard this material yet, aside from my wife and my cat, and maybe a poor roommate or two- tortured by my endless tape loops.”

I really hope that is not really true. But if it is, this certainly has to change soon, because this music deserves to be heard by you, your cat, and your roommates, too!

“Vostok I“ starts with a slow and somewhat threatening beat, which slowly builds into a cinematic atmosphere.

The cinematic atmosphere further unfolds in the 16 minute long second track called “A Cake of Ice Melting in the Sun”, which somehow reminds me of the atmospheric sounds of Bersarin Quartett (but without the string samples).

But there’s a twist: the theme suddenly shifts into a stretched drone, ambient sounds incorporating some unidentified field recordings, slowing down the track completely – as if you suddenly fall into a deep sleep – only to wake up again when the refrain returns.

It is this particular twist I especially like, since it is what makes this album different from most others.

The title track revolves around a (fairly simple, but effective) piano theme, and it’s easy to imagine the relation with the same named russian space flight which brought Yuri Gagarin into space in 1961.

‘Brighter than a Thousand Stars’ takes its time to slowly build into another ambient-lounge climax, before Slow Waveslowly drones back toward the end of the album.

An impressive and refreshingly unusual combination of sounds – and that was only part I!

“Vostok II“  features two long tracks: “Sea of Showers” and “Marsh of Sleep” – 11:50 and 32:16 respectively.
The first one seamlessly follows the sounds from “Vostok I”, whereas “Marsh of Sleep” is a beautiful widescaped Eno-esque ambient track – a soundscape without a single beat (well, almost).
I can hardly wait to hear where this will lead to on “Vostok III” later this year.

No need to be modest about this: this is classic ambient with a refreshing twist.!

TRANSITS OF MERCURY – POLE OF COLD