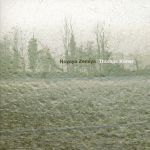 It starts with a deep trembling sound. It’s not thunder, but it does not exactly sound mechanical or man-made either. It may come from somewhere deep inside the earth…a strange kind of sound to break the vast silence.

With sounds like these, it’s not difficult to imagine you are witnessing the birth of New Land – which is in fact the translation of “Novaya Zemlya” (or Nova Zembla in dutch, known for the famous Willem Barentsz expedition in 1594).

The name also refers to the archipelago in the north of Russia, extensively used for nuclear testing during the Cold War – which creates an entirely different context for the sounds on this album.

Compared to his 2009 release “La Barca“, Thomas Köner returns to the form of his earlier albums like Nunatak, Teimo and Nuuk: slowly evolving, immersive soundscapes, able to make the listener lose all sense of time.
In fact it’s a surprise to find that “Novaya Zemlya” clocks in just about over 35 minutes, while it feels it could have easily lasted for over an hour or even longer.

To quote Thierry Charollais (from the liner notes): “Listening to his music, we escape the habitual notion of time and space, facing a sense of eternity or infinity that is both stunning and frightening.” …
“I remember exactly my feelings when I gradually discovered this music, its breathing that seemed so vast, almost infinite and glacial, while at the same time strangely heartwarming and calming my mind.”

Starting with the enigmatic thunderous sounds, the album slowly evolves and gradually incorporates other elements – some field recordings, an occasional vocal fragment even.
But whatever the results of this (human) intrusion may be, this land will never lose its fundamental quiet, its unchangeable emptiness.

With “Novaya Zemlya“, Thomas Köner has added another stunning masterpiece of Audio Art to his already impressive collection.