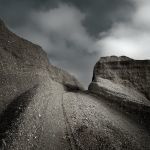 “Paths” is the follow-up to Olan Mill‘s debut release “Pine” (released in 2010 on the Serein label).
Their second release (now on Facture) continues to explore their “unashamedly romantic music”, with a well-merged blend of violin, pipe organ and processed guitar.

Olan Mill‘s sound is somewhat comparable to the sound of the Stars of the Lid and A Winged Victory for the Sullen and will definitely appeal to the same audience.

It is hard to believe that this is not the sound of a full orchestra, but of just two people (Alex Smalley and Svitlana Samoylenko), “reconciling the ambition of an orchestra with the limitations of a duo”.

The basic tracks for these six tracks were recorded at two live performances in 2010.
“Direct and melodic without the obsession of minimalism, “Paths“ is an honest and engaging account of both melancholy and euphoria.”

The full package of this release (which is limited to 300 and will probably be released within two weeks) consists of a hand-numbered/stamped/sealed (and scented!) package containing 180gr vinyl as well as CD, a booklet, limited edition print and A2 poster.