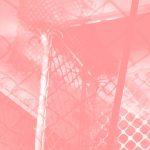 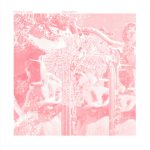 All Intensive Purposes, released on Room40, is a set of seven relatively short soundscapes that ‘can be best characterized by one word — charm, well, maybe two words — questionable charm.’ It is a strange combination of distant loops, layered sounds and ‘ghostly utterances‘, a hazy sound as if coming from a distant dream that would perfectly fit the set of The Shining. “Catastrophe muzak”, perhaps, but also a pleasurable listen.

Compared to All Intensive Purposes, the four tracks on Shouting At Nuance are much longer: between 14 and 27 minutes each. The two longest tracks (Problematic Interior 3 and Alternatory) were previously released in 2019 as part of On Corrosion: the 10 cassettes set housed in a wooden box that was released to celebrate the 50th release on the Helen Scarsdale Agency. A cult collector’s item by now, so it’s a good thing that this label decided this was worth a re-release.
For this double vinyl release two extra tracks are added: But It Felt/In Other Dreams and She Who Controls. These were álso previously released as a cassette: in 2017 on the Tapeworm release Something You Are, Something You Do. So no news perhaps for the die-hard collectors, but for most others, this will feel like a new release.

The liner note description is as recognizable Pinkcourtesyphone as his music is – and I definitely could not think of a better description myself:
“His search for ghosts on tape sifts through the warbles, clunks, notes, and beats moistened an smudged through a mid-to-late century antiquity that also pilfers from a variety of moldering vhs tapes and miserable cassingles. […] With allusions to decay as an unrecognizable reconstruction of past works, his ghostly ambience becomes a dub of itself, echoing back a dispersion of drift and drone into a feedback loop of disintegrated memory.”

When mentioning physical editions we’re usually referring to CDs, Vinyl or Cassettes. Mathijs Leeuwis challenges the true collector with his release on an even more anachronistic medium: Généalogies 2 is released on – wait for it – reel-to-reel tape! In a very limited edition, by the way, so if you’re lucky enough to have a working tape recorder, you’ll have to be quick (the release date is September 23). But if you’re not so lucky: Généalogies 2 will also be available as a download via Bandcamp.

Généalogies 2 is the follow-up to Généalogies (obviously), released two years earlier. It’s a further study of imperfection as a tool for creating self-generating (auditive) realities. Leeuwis’ starting point was that ‘erratic systems create new worlds, which lead to new ideas … Leave, forget and invent again.”
Compared to the previous Généalogies, the process is now more generative: define a set of rules and the basic material, and then let them evolve within a more or less controlled system.

Tape and feedback are Leeuwis’ main instruments and so releasing it on reel-to-reel is a justifiable (nut bold) choice.

The four separate pieces Généalogies III, IV, V and VI are shorter than the previous I and II: they are only 21 minutes in total. The release also contains a continuous mix of the separate tracks, which is Leeuwis’ preferred version.